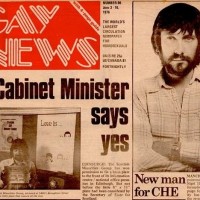 Even though male homosexuality was decriminalised in Britain in 1967, it still occupied a legal grey area in which it could be classified as an ‘unlawful’ act contrary to the public good. This was because of the revival of a common law offence known as ‘conspiracy to corrupt public morals’ which was applied to those gay men who were advertising in the new gay press for friends and lovers. END_OF_DOCUMENT_TOKEN_TO_BE_REPLACED