In September 2015, disability activists held a protest outside the Irish Parliament (Dáil Éireann). 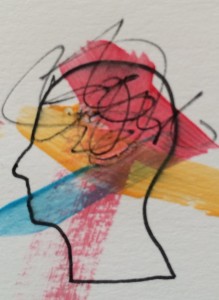 They argued that the Government’s plan to invest an additional €450 million in institutional care was a backward step, ‘a kick in the teeth’ for a group that had ‘escaped’ similar care in the past. In contrast, protesters emphasised the need to increase the allowances paid to people with disabilities, as these allowances facilitated them to ‘live with dignity and respect’ within the wider community.[1]

The provision of disability allowances has a relatively long history in Ireland, beginning in 1954 with the introduction of the Disabled Person’s Maintenance Allowance (DPMA). Yet, the payment has remained a topic of controversy throughout the second half of the twentieth century, with its role continuing to spark debate into the twenty-first. Subject to lethargic administration, insufficient inspections and infrequent increases, disability allowances have served as a microcosm for wider issues plaguing the Irish Social Welfare system. Yet, the topic remains virtually unexplored within academia, excluded from seminal analyses of Irish social welfare services like Mel Cousin’s The Irish Social Welfare System (1995). This consideration explores some of the challenges underlying the allowance during its early years from 1954-61.

‘Aiding the most necessitous cases’: Establishing an allowance scheme 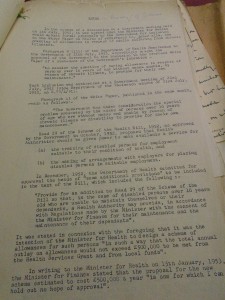 ‘A magnificent contribution’: Reaction to the allowance

In contrast to the reluctance seen within the Department of Finance, the reaction of public representatives to the allowance was almost universally positive, with members of parliament (Teachta Dála) from across the political spectrum praising the payment.[6] The only complaints with the allowance arose around its low rate of £1 and its poor administration by the regional local authorities. Speaking in the parliament in June 1955, Deputy Neil Blaney of the centre-left 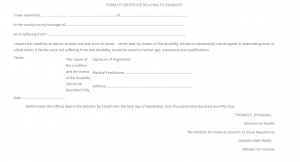 Fianna Fáil party described how ‘The good intentions that were behind the introduction of that particular section are in many cases, I am afraid, being nullified or being watered down’ by the actions of the local authorities. He appealed to the Minister for Health to issue a directive to  mitigate against the ‘miserly and niggardly treatment’ within the administration of DPMA by the local authorities.[7] Deputy Blaney’s complaints were justifiable in the light of the local authorities high rejection rate of Disability Allowance applications, approving only 20% of applications in the Dublin Health Authority in 1955.[8] Despite these complaints, the allowance continued to receive praise as a necessary aide to ‘the blind, deaf or mental defective youth to the tuberculous, the diabetic, the maimed and the arthritic.’[9]

‘The family remains paramount’: the case of Veronica Loftus

Yet, while the allowance scheme was welcomed as an aide for those with a disability there remained a lack of safeguards for the care of recipients, as seen in the death of Veronica Loftus in June 1961. Veronica lived in an apartment in Dublin’s north inner city, shared with her mother. She had been certified as ‘mentally deficient’ and was receiving a maximum rate disability allowance from the Dublin Health Authority since 1954. At the inquest into her death in July 1961, the city coroner Dr. D. A. MacErlean attributed her death to a prolonged period of starvation, noting how her four foot ten inch frame weighed only four stone (56 pounds) at the time of her death.[10] Newspaper coverage of the coroner’s court detailed the poor conditions within Ms. Loftus’ apartment, in which there ‘was no bed, no cooking utensils, no plates, no cups, no gas and only cold water.’ A notable witness to the coroner’s court proceedings was the Inquiry Officer from the Dublin Health Authority who managed Ms. Loftus’ DPMA payment. She noted that she had never being allowed into the flat on Upper Sean McDermott street, meeting Ms. Loftus and her mother ‘on the landing’. When questioned further as to why she did not enter the apartment, the Inquiry Officer clarified that the general welfare and living conditions of the recipient were not her concern as ‘The officer’s job was merely to check that people receiving allowance[s] were alive.’[11] Yet, when Ms. Loftus’ death was debated in the parliament, the Minister for Health Séan MacEntee saw no reason to change current system of oversight. Instead, he blamed Ms. Loftus’ family for not aiding her, saying that: 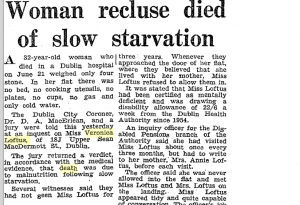 Coverage of the Veronica Loftus case in the Irish Press, 21 July 1961

‘This unfortunate person had a mother, sisters and other relatives. I think the responsibility lay on them to look after her, the community having come to her assistance to the extent of the disability allowance paid to her … the assumption upon which all our statutes is based, and on which the Constitution is based, is that there is regard to be had of the principles of family responsibility without which we cannot have any communal life at all.'[12]

MacEntee’s statement underlined a system where those with a disability were left largely to fend for themselves. Rather than serving as one support within a range of welfare services, the payment of a disability allowance demarcated the end of the state’s responsibility for their welfare.

The introduction of the disability allowance scheme in 1954 was a clear evolution within the Irish welfare system, which remained noted for its underdeveloped social security infrastructure.[12] The introduction of this new welfare payment for the disabled was condemned as a ‘leap in the dark’ in the Sunday Independent newspaper,[14] with even the Minister for Health noting its introduction was not based ‘on other countries that would have been a guide to me.’[15] Unlike the United Kingdom, which saw the gradual expansion of disability services within the general mechanisms of the welfare state, the Irish state introduced the DPMA payment rapidly, but then failed to reform its administrative anomalies until its incorporation into the remit of the Department of Social Welfare in 1996. This ‘leap in the dark’ policy measure was quickly accepted across the political spectrum as a necessary and useful scheme, with members of parliament campaigning for increases to the allowance throughout the 1950s and 60s.

However, the disability allowance also remained a limited financial benefit within a field devoid of state resources for the disabled. In the absence of other state services, the voluntary sector evolved to take an increasingly prominent role in the provision of services throughout the latter half of the twentieth century in Ireland, an effort culminating in the work of voluntary sector groups in organising Ireland’s hosting of the Special Olympic Games in 2003. Interrogating the genesis of the DPMA can appear an abstract topic, divorced from the ‘lived experiences’ of those with a disability. Yet, an interrogation of the debates and discourses around this allowance offers the historian a greater insight into the popular conception of the disabled, as well as reflecting back on the wider working mechanisms of the Irish state.

David Kilgannon is a Wellcome Trust PhD researcher in the Department of History in the National University of Ireland, Galway. His research examines the varied experiences of the intellectually disabled in Ireland across the latter half of the twentieth century. He was previously a Hardimann Fellow and a Wellcome Trust MA student.