Generations of historians and sociologists have debated just where clerical workers fit in the class structure. Much of their effort has focused on the workplace and the experiences and struggles of workers—female and male—engaged in office work and retail sales. However, these studies have generated little consensus beyond the takeaway that the collar line is as permeable as it is ambiguous.[1] 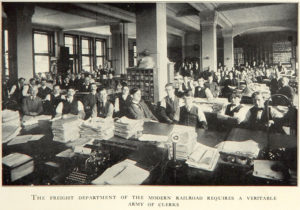 I take a look at the consumption side of the story. This alone is nothing new. Historians and social theorists agree that education, sociability, and lifestyle, in addition to income, occupation, and workplace experience, shape class experience and identity. What struck me when I read their letters, though, was that railroad clerical workers struggled to make ends meet in 1920. Across the 1920s, in fact, white collar workers, not to mention the majority of mass production industrial workers, as well as many of those in the farm sector in the United States, struggled to achieve the discretionary spending usually associated with the middle class during this emerging age of mass consumption. True, the first half of 1920 stood as a moment of economic stress brought on by the inflation-induced Great War economy combined with the dislocating effects of crash-course demobilization. Still, that moment offers an opportunity to explore how white collar workers coped with inadequate income. To make ends meet what kinds of consumption choices did they make? What kinds of consumption strategies did they pursue? What kinds of consumptions patterns did they demonstrate?

The letters those railroad clerical workers wrote—to their union as part of its case for a wage increase before the United States Railroad Labor Board—allowed me to get a sense of their consumption choices, strategies, and patterns. In their letters, which the union submitted to the Board as evidence of their members’ need, clerical workers detailed their family budgets and explained why they felt they needed higher wages. After the case closed in July 1920, the letters ended up as a part of the agency’s archival record in the National Archives and Records Administration in Washington, DC. I am not sure, but I suspect most researchers, more interested in the institutional history of railroad labor relations, have skipped over these letters, buried as they are amidst the Board’ voluminous case files. I may be the first historian to look at them systematically.

I found that railroad clerical workers and their families had to make some hard choices about what they could afford and what they must do without. They made expenditure decisions and pursued consumption patterns based on bottom-line assessments of need and comfort. Yet these workers and their families wanted more than to ‘simply exist’. They also wanted ‘to live’. Their letters told stories of aspirations for better living, strivings for economic security, and desires for some of the nicer consumer goods, too.

Did those aspirations, strivings, and desires reflect bourgeois values? As I read them, clerks’ letters revealed budget choices involving ‘observable’ consumption like housing, furnishings, and clothing and ‘prudential’ expenditures such as saving and investment in children’s education.

These consumption choices and expenditures struck me as evidence that some clerks and their families sought to maintain material aspects of a middle-class living standard. We could read their ‘aspirational’ budget choices as efforts at ‘being’ middle class through social distinction.

Class, Consumption, and the American Dream 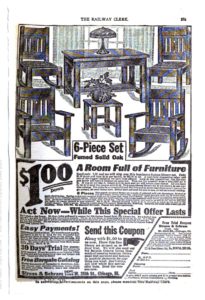 An advertisement typical of aspirational consumption from The Railway Clerk, 5 April 1920.

The budget choices and consumption strategies I encountered in the letters could also indicate a more democratic working-class belief that clerical workers and their families were entitled to the comforts and pleasures of abundance (or, as many put it, an ‘American standard of living’). What is clear is that clerical workers and their families uniformly wanted more secure and comfortable standards of living. Yet in the immediate postwar years and down through the 1920s they struggled to achieve those standards and security, whether or not we call them ‘bourgeois’ or ‘middle class’.

To make ends meet, railroad clerks’ families engaged in survival strategies reminiscent of the blue-collar working class: cash replacement, wifely wage-earning, moonlighting, mutualism. For these white-collar workers, those strategies, together with the fact of their union membership, underscore historian Susan Porter Benson’s findings that between the wars working people in the United States did not engage with the mass market as autonomous individuals seeking fulfillment through consumption. Rather, consumption involved collective and, with the union, institutional aspiration and struggle.[2]

In the end, railroad clerical workers’ spending choices, acts of distinction, and survival strategies, captured in their letters of April 1920, complicate easy conclusions as to white collar workers’ class location. Aspiration toward higher living standards does not necessarily entail assimilation to the middle class. On the other hand, those choices and strategies and acts of distinction also hint at efforts toward the kind of upward mobility long associated with the US middle class and the American Dream.

Paul Michel Taillon is a Senior Lecturer in History at the University of Auckland | Te Whare Wananga o Tamaki Makaurau. He is at work on a book-length study of railroad labor politics in the United States during the First World War and the 1920s. His article ‘Making Ends Meet: Clerical Workers, Consumption, and the Collar Line in the USA in the 1920s’ is available to read online in Social History 46.1.