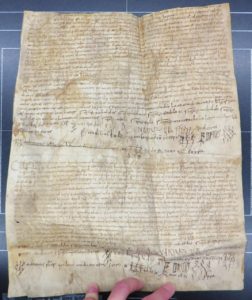 What do you do if you lose or damage an important document, a contract or a lease or something like that? These days, you probably just download a fresh copy, but not so long ago that wasn’t an option; you might have had to go back to the relevant office and pay for a new copy to be made and given to you. But go back to the centuries after the breakdown of Roman rule in Western Europe and there were no such offices. My article in Social History 44.3 looked at what people did, in that world, to make something an official record when there were no officials to record them.

The short answer is: they gathered people together and made sure that everyone agreed what the situation ought to be, and then they wrote it down and had everyone present, or at least a selection of important or useful people, sign it. We have a good description of such a ceremony from just outside Vic, in modern-day Catalonia, where in July 898 a man who was genuinely called Boso assembled just such a gathering, because he had lost two land charters that entitled him to lands in the village of Taradell (where you can still go, and which has an excellent little castle looming above it). The charters had themselves been witnessed by some local notables, and two of those people  were still around to be called upon, but so were other people who had seen the ceremony even though they were not the witnesses. According to the document we have, all these people were placed under oath by a priest, and then swore to their memory of the lost charter. Their recollections were quite detailed, and included the property boundaries and the names of the transactors, the witnesses and the scribes, although the scribe of the document we have seems to have invented fancy titles for his earlier counterparts, a complication I deal with in the article. 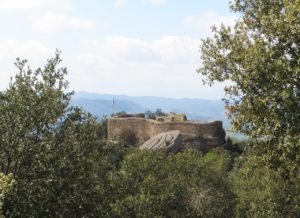 The Castell de Taradell, a fourteenth-century building as it stands but a location probably familiar to Boso and his associates; photograph by the author, 2016.

Nonetheless, the witnesses also explained how they remembered the charters so well: after the original transactions had taken place and the charters made, they had all gone to the actual properties and stood on the land concerned together while the charters were read, three times over. By the end of all this, no-one could be in much doubt about who now owned the land and what was included in the deal. And thankfully for Boso, when he lost his charters—how, he did not care to have recorded—that meant there was a means to recreate the proof of his tenure.

In the article I suggest, piecing together hints from other similar documents, that such readings were probably carried out regularly, perhaps on the anniversaries of transactions or on some other occasion, like a feast day, when lots of people would have been present to hear. Perhaps it was considered part of the official business; perhaps it was just the price of the dinner; but either way, it explains how, when there were no official archives, a social memory might still be maintained that could function as an unofficial land register, preventing disputes and generally allowing propertied life to go on.

Getting to that point had not been instantaneous, however. In the Roman Empire, because land tenure implied tax liability, there had been state registers of who owned what land, and when land was transferred a record had to be deposited in the ‘municipal deeds’ (gesta municipalia) to ensure that that liability was transferred. Work on documents from the sixth and even seventh centuries from what are now France and Italy has shown that, even long after the tax system had ceased to operate, the ceremonies of deposit were still held in some big towns so that a land register still existed.[1] To us this may seem like living in the ruins pretending that Rome had not fallen—though we might ask why the sixth-century citizens of Ravenna should necessarily have thought it had fallen, given that they still answered to an emperor in Constantinople or a king who sometimes admitted to being the emperor’s deputy. Either way, though, we must assume that they did not continue these rituals meaninglessly, that they still served some purpose, and it may be simplest to assume that that purpose still revolved around land tenure, since that is what the documents concerned record. 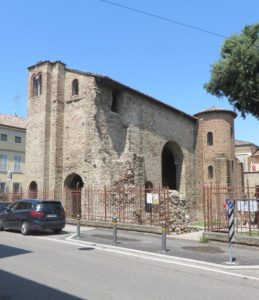 The sixth-century Palazzo di Teodorico, Ravenna, a possible location for civic assemblies in the city; photograph by the author, 2019.

Of course, those ceremonies were also large gatherings of important people, who quite possibly heard the documents in question read out; that would, after all, have been far quicker than each man and woman present reading the single copy of it themselves. The difference between the urban élites of Ravenna gathered to hear the latest deals and see them officially deposited and the ad hoc gathering in the Catalan countryside to hear Boso’s charter read out in triplicate 250 years later might not have been so very large, in terms of what each ceremony did: create a social memory of the transaction which might later be called on when needed.

Continuity and change in communication cultures

All this means that oppositions that have long lived in the historiography, between formal, legal, written, and informal, customary and oral, with the Roman world firmly on the side we recognise and the post-Roman one on that of rustic bumpkinism, need reevaluation. Long ago the late lamented Michael Clanchy wrote a famous book entitled From Memory to Written Record about the growth of a culture of written administration in England under the Norman kings.[2] Even allowing for most parts of Europe having had a less rough passage out of Roman membership than did the British Isles, documents like these show that such a dichotomy is too clear-cut. In one sense, Boso’s document shows us an effectively oral record: people were found, made to speak solemnly and then what they said proved Boso’s case. But then all this was written down, and what the speakers remembered was a written record, converted into orality by the ceremony of reading. We might now think of accessibility technology like screen-readers; the reading-out was the technology needed in 898, not to replace written record with memory, but to allow the written record still to work. Should Boso have had any further difficulties—and no further record of him survives, so he probably didn’t—he would have brought his document, and it would have been read out again, as a written voice of testimony. All of this was recorded in Latin, to keep going a set of modes of practice that were effectively a Roman tradition, transformed by the intents of a group of people to keep that tradition usable. Fittingly, the last edition of Clanchy’s book included a new chapter admitting that post-Roman Britain might have been more able with records and documents than the early Norman world where his enquiry first started.[3]

Boso and his friends, and the citizens of Ravenna and other places before them, show the witting and practical ways in which that continuity of expectations was maintained after the administrative superstructure that had once created the expectations was gone. We could use all this to think about how rituals and legal practices serve more purposes than one, what it is that people get from engaging with the ceremonial—and whether it is necessarily what those officiating intend—and how maintaining social practices can still involve their transformation. Guiseppe Tomasi’s famous line from The Leopard, “If we want everything to stay as it is, everything has to change,” may be applicable here as in many other places; but if we apply it, we should not miss the things that those changing things were, and are, also preserving.[4]

Jonathan Jarrett is Associate Professor in Early Medieval History at the University of Leeds. He has also taught in the universities of London, Oxford and Birmingham, and worked in the Fitzwilliam Museum and the Barber Institute of Fine Arts. His main research interests are in low-level, high-volume sources from the Middle Ages, like charters and coins, and what they reveal of power relations and attempts to govern. He is especially interested in frontiers, where those things are less certain. He pursues these questions especially in the area that is now Catalonia, but is interested in the same phenomena anywhere in the medieval world and beyond. He also likes good tea, good beer and bad jokes.