By the last quarter of the nineteenth century, Liverpool Borough Prison [1] had a rather unwelcome claim to fame, reputedly having the largest population of female prisoners in the country and possibly Europe. Many of these women, largely Irish migrants to the city, mostly Catholic, and often young, became involved in prostitution on reaching Liverpool, and were committed on charges of soliciting, vagrancy, or of being drunk and disorderly. 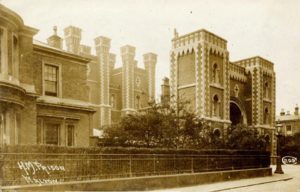 Our article, ‘“Unfit for Reform or Punishment”: Mental Disorder and Discipline in Liverpool Borough Prison in the Late Nineteenth Century’, while focusing largely on the impact of the prison’s discipline on the mental health of its inmates, also examines the challenges the prison faced in dealing with the unwelcome burden of large numbers of unruly women in an already overcrowded and resource-stretched prison. Where possible, we tried to find out more about the women, and conduct research into their circumstances. The women’s stay in prison was generally brief, but oftentimes frequent. In the first nine months of 1864 1,526 women were taken into Liverpool Prison, some with 30, 40, 50 or even 60 prior convictions.[2] In 1871 one woman, ‘attained her 105th commitment’.[3] Given the brevity of their sentences – often measured in days – there was little scope for reform and rehabilitation, and the women were simply processed, their sentences offering a few days respite, shelter and food, and the opportunity to dry out before being sent back into the city to reoffend.

From J. Binney and H. Mayhew The Criminal Prisons of London (1862).

By accessing a diverse set of institutional archives, we have been able to follow the lives of women who were not only frequently sent to prison, but who moved regularly between prison and asylum, and in some cases the workhouse too. Many of these were Irish migrants; in 1876 the Commissioners in Lunacy reported that among the Irish female patients in Liverpool’s Rainhill Asylum, 11 could be traced back to Broadmoor Criminal Lunatic Asylum or prisons.[4] One such example was Frances Holden, a 33-year-old single woman, committed on numerous occasions to Liverpool Prison for prostitution, who was transferred to Rainhill Asylum in July 1873. By then she was claiming that she had been in prison 33 times. Diagnosed with mania in Rainhill, and suffering severe delusions, she became a turbulent presence in the asylum. After a stay of three years, she was removed ‘unimproved’ in October 1876 to Lancaster Asylum.[5] Annie Cochrane was transferred from Liverpool Prison to Rainhill in March 1906. Her occupation was listed as ‘nil (prostitute)’ and she was described as very intemperate, and indeed the cause of her attack of insanity was given as ‘alcoholism & prostitution’. She had given birth to a stillborn child two years previously and remained subject to delusions, claiming that the asylum staff were jeering at her and trying to poison her. The casebook described her as ‘A degraded looking woman who says she has been in prison thirty times during the last ten years for fighting & drunkenness.’ She stayed in the asylum for four years, before succumbing to phthisis in October 1910, being one of the many female prisoners to die of tuberculosis.[6]  Matilda Fox, a 22-year-old prostitute, recorded as Roman Catholic and Irish, was admitted to Rainhill in the same year. She had been born in Liverpool, brought up by an aunt, and was said to have been of weak intellect since birth. Matilda claimed that she had never worked and had been in prison twice, and the Rainhill casebook reported her death five years later in 1911 from ‘cerebral syphilis’.[7]

Among women removed to asylums, many were found to be suffering from late stage syphilis, general paralysis of the insane (GPI), contributing to the remarkable rise of the disorder in asylums in the late nineteenth century. The symptoms were progressive and intensely painful, including dementia, and muscular spasms and paralysis.[8] Referred to as a disease of cities and large towns and associated with ‘bad living’, GPI was incurable and placed a heavy workload on asylum doctors and staff.  Prisons officials were keen to move troublesome GPI victims into local asylums. As patients they were difficult, often described as physically broken down, demented, restless, filthy and dirty. Their deaths, following a slow and dreadful decline that could take several years, pushed up asylum mortality rates.[9] One such case, Catherine O’Brien, a 30-year-old Irish woman imprisoned for stealing, was removed to Rainhill in April 1876, her husband stating ‘she was always addicted to drink’. While in the asylum, she fell and broke three ribs, lost weight, and became more and more enfeebled. Before her death a year and a half later from ‘dementia & GP’ she became severely emaciated, quarrelsome, and delusional, asking everyone to her house and ‘promising grand tea & dinner parties’.[10]

Asylum records are more forthcoming than prison archives on the fortunes of the women prior to admission, and one common characteristic was their isolation, another their status as ‘wanderers’. Many women moved from Ireland in desperation and on arrival often found themselves in equally desperate situations. There was little work for women in Liverpool, and recourse to prostitution or begging or other employment that made them particularly vulnerable, such working as hawkers and barmaids, might be their only means of survival. Others became servants, such as Eliza Corish, who was confined to 12 months in Kirkdale Gaol in December 1869 for concealing the birth of her child, and transferred to Rainhill in July of the following year after being found insane.[11] Some of these women managed to evade arrest, ending up in the asylum via the workhouse, such as Catherine Smith, a 29-year-old, single Irishwoman, who was described as a prostitute and intemperate when she was moved from Liverpool Workhouse to Rainhill in December 1881. Born in Dublin, she had lived in England for ten years in different towns and had only been in Liverpool a week before being taken into the workhouse, incoherent, rambling and violently excited.[12] Catherine Cox was well-known to the Liverpool authorities, excitable and disruptive, and ended up on several occasions in Rainhill and the workhouse, but appears to have avoided prison. Described as a prostitute, ten years previously  ‘she was in Dublin in service & it was there that she first began to lead a fast life’.[13] 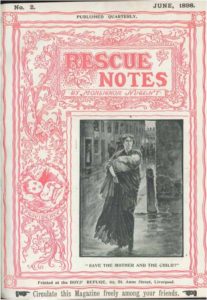 Local observers, not least, Reverend James Nugent, Catholic minister to the prison, expressed grave concern about the high number of Irish prostitutes, and the ease with which such women were lured into a life of drink and crime. Nugent sought heavier penalties as a deterrent but also pointed out that many, especially younger women, had been forced into the life through circumstance. It was these helpless and hopeless cases, without food or shelter, who, through ‘bitter necessity’ were forced ‘to return to their old haunts and habits’, leading to high rates of reconvictions.[14] For some, the cost of the passage back to Ireland was paid for, though several subsequently reappeared in Liverpool Prison,[15] refuges were established in the city, and female emigration encouraged. Each measure intended to remove the women from the ‘corrupting’ city, in which, it was alleged, over 695 brothels alongside other houses for prostitution operated.[16] Liverpool’s prison officials despaired of reforming the women, and by the end of the century, their responses to the ‘great disgrace to our age’, hardened.[17] The problem, however, remained intractable, with high rates of admission to the prison and asylum of women who were victims of extreme poverty, dislocation, stress and isolation.

Though the number of women in prison today is relatively small (c.5 per cent of the UK prison population), many of the issues affecting them are similar to those facing Liverpool’s impoverished and desperate women in the late nineteenth century. While popular media remains preoccupied with women as perpetrators of violent crime, most are imprisoned for relatively minor offences, usually non-violent, many are the victims of domestic violence or sexual abuse, some are recent migrants, and the vast majority poor and vulnerable. Studies have shown that even short-term imprisonment has a profoundly negative and lasting impact on women and their families.[18] As Chris Tchaikovsky, founder of Women in Prison, argued, ‘Taking the most hurt people out of society and punishing them in order to teach them how to live within society is, at best, futile… she knows everything there is to know about punishment because that is exactly what she has grown up with. Whether it is childhood sexual abuse, indifference, neglect; punishment is most familiar to her.’[19]

Dr Catherine Cox, Associate Professor at the School of History, University College Dublin specialises in the social and cultural history of medicine and health.  Professor Hilary Marland is Director of the Centre for the History of Medicine at the University of Warwick, and has research interests in the history of mental disorder, household medical practices, and women’s health.

We are co-Principal Investigators on the Wellcome Trust Award, ‘Prisoners, Medical Care and Entitlement to Health in England and Ireland, 1850-2000’, researching the strand on mental health in prisons and previously collaborated on a project examining mental illness among Irish migrants to Lancashire. This blog is based on research from both these projects.

[19] ‘Women in Prison: Our History’, https://www.womeninprison.org.uk/about/our-history.php