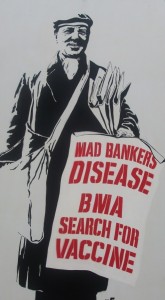 At the annual Economic History Society conference at the end of March 2015 four economic historians (Martin Daunton, Avner Offer, Jim Tomlinson and Keith Tribe) offered perspectives on Piketty’s (2013) Capital in the Twenty-First Century. All of the contributors welcomed the book’s focus on inequality as one of the key issues of our time.

They also welcomed Piketty’s view that historical evidence was crucial to understanding how current inequality levels had developed from the much more egalitarian distributions of income and wealth achieved in the middle decades of the twentieth century. Avner Offer described Piketty’s ‘rich descriptive account’ as a ‘stupendous achievement’, but the overall tone of the discussion was largely critical. This criticism focused on the underlying ideas behind the book, some of its key conceptual underpinnings, and its politics.

The book’s title is a self-conscious reference to Marx’s (1867) Capital and the comparison with Marx’s work is instructive. Like Marx, Piketty sets out to establish the fundamental ‘laws of motion’ of modern capitalism, but (like Marx) what is really established are tendencies, but without adequate account of the counter-tendencies, and how their operation might undermine the prediction of greater inequality. Thus Piketty’s key ‘law’ is ‘r>g’, where the rate of return on capital is greater than the growth rate, and so capital enjoys an increasing proportion of total returns. But, as the book argues, for the years from World War I down to the 1970s, this tendency was offset by a low level of ‘r’ due to war followed by capital destruction and then high taxation, whilst after 1945 ‘g’ was exceptionally high due to much of the world catching-up with the GDP levels of the USA. These counter tendencies appear as highly contingent, rather than derivable from Piketty’s ‘fundamental laws’.

While Marx is invoked by Piketty, his definition of the key term ‘capital’ is not Marxist; it’s not about a social relationship. But neither is it about the physical capital that serves as a factor of production in neo-classical growth models. Rather, his ‘capital’ is actually wealth, the sum of all assets, real and financial. This definition has a number of implications. It means Piketty’s argument is a hybrid, adhering systematically to neither Marxist nor neo-classical norms, though owing more in practice to the latter. This definition also means that housing, the fastest growing source of wealth in rich countries in recent decades, is hugely important in the data Piketty presents, but the significance of this fact is never dealt with in any depth in the discussion.

This absence is very important for how we think about the overall trends in wealth distribution. Piketty focuses most of his attention on the top ten per cent of the distribution, but he does note how housing wealth especially has been re-distributed to what he calls the ‘patrimonial middle class’, those lying between the top ten per cent and the mid-point of the distribution. As he notes: ‘In historical terms, it was a major transformation, which deeply altered the social landscape and the political structure of society and helped to redefine the terms of distributive conflict.’[1] But this insight is not followed through to look at the way in which property ownership below the top ten per cent has buttressed the ownership at the top. To put the point in another way, in a country like Britain because of the spread of owner-occupation, the median voter is now a property-owner, and this must be seen as crucial to understanding modern property-distribution and the politics linked to it.(The recent explosion of buy-to-rent just adds another layer to this property-owning group).

Despite assertions about the importance of politics, Piketty has strikingly little to say about what has driven the rise in inequality, especially in the US and UK, since the 1970s. How has the underlying tendency of ‘r>g’ been allowed to re-assert itself? Piketty points to ‘changing social norms’ without explaining the mechanisms of change. He also argues that tax competition has, in Britain and the US, led to a ‘race to the bottom’ in income and wealth taxes. This has some force, but it doesn’t explain why such a race has not dragged most European countries down as well. A key feature of Anglo-American capitalism, which is mentioned but not well explained, is the rise of the ‘super-manager’; the corporate boss who combines enormously high salary with stockholding in the same company. The modern super-rich are decreasingly rentiers, but instead use their dominance of corporate hierarchies to extract large rents. Again, this is a particularly strong feature of Britain and America which has had much less impact in continental Europe, and so an explanation is unlikely to be yielded by postulating general ‘laws of motion of capitalism’.

Piketty proposes a global wealth tax as a solution to growing wealth inequality, albeit he accepts this is a ‘Utopian’ idea. Plainly a more sophisticated analysis of possible options is required. A key question is the ‘room for manoeuvre’ in the tax system, in the light of the political constraints. Here Martin Daunton was pessimistic, because of his perception that, in Britain at least, big property had built powerful ‘ramparts’ of smaller property-owners around itself, which meant that direct assault through higher income and wealth taxes was unlikely to be politically successful. Others accepted that some degree of pessimism about the politics of raising the standard rates of tax was appropriate, but pointed to the possibilities of acting to challenge many of the regressive tax expenditures embodied in, for example, tax breaks for pensions.

Away from these pragmatic discussions, Avner Offer stressed that Piketty, like so much of contemporary discussion, was still constrained in his thinking by an unwillingness to offer an ethical critique of inequality, rather than one stressing its ‘dysfunctionality’. The underlying thought was the pernicious impact of neo-classical economics individualistic assumptions, and the failure to recognise that in most of everyday life what mattered was our numerous, diverse obligations (to family, friends, profession, country etc), not the calculation of self-interest.

By contrast, Keith Tribe emphasised the importance of the development of a distinct tradition of welfare economics in Britain from the late nineteenth century (Sidgwick, Marshall, Pigou) which had made the key arguments for redistributive tax policy. In his view this tradition in economics still had much to offer in thinking through how inequality can be analysed and addressed.

Finally, on the question of Piketty and history, there was agreement that whatever the strengths and weaknesses of his own historical argument, he had set an agenda for the historical investigation of inequality which desperately needs pursuing. As Pat Hudson stressed in the discussion, the specific historical circumstances which made economic growth the centre-piece of much economic history in the 1950s and 1960s (not least the Cold War) have passed away, and a new focus is greatly needed which gets closer to the determinants of popular economic welfare.

Jim Tomlinson is Professor of Economic and Social History at the University of Glasgow.