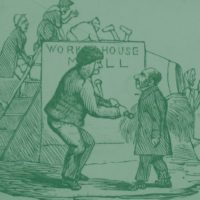 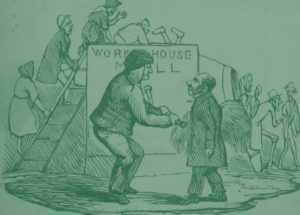 Our Social History 46.2 article ‘“I think we ought not to acknowledge them [paupers] as that encourages them to write”: the administrative state, power and the Victorian pauper’ focuses on the responses from the central poor law authorities (the “Centre”) to initial complaints from poor people and paupers both inside and outside of the workhouse. For the outdoor poor these complaints centred on dissatisfaction with the amount or nature of out-relief they had been allowed or the fact that relief had been denied altogether.  For the indoor poor the majority of the complaints tended to be around issues of ill-treatment, neglect or poor conditions in the workhouse.  We highlighted that the Centre quickly developed routine standardised ways of responding to these complaints. END_OF_DOCUMENT_TOKEN_TO_BE_REPLACED 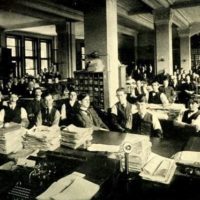 Generations of historians and sociologists have debated just where clerical workers fit in the class structure. Much of their effort has focused on the workplace and the experiences and struggles of workers—female and male—engaged in office work and retail sales. However, these studies have generated little consensus beyond the takeaway that the collar line is as permeable as it is ambiguous.[1] END_OF_DOCUMENT_TOKEN_TO_BE_REPLACED 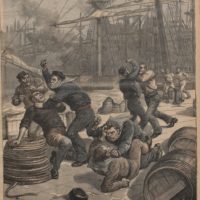 ‘Sailortown’ was a seaport’s urban quarter where sailors would stay, eat, drink and be entertained.  It was a transient and liminal space and a unique site of cultural contact and exchange. Despite the rich array of research areas in class, race and gender relations that these districts have to offer, sailortowns have tended to be overlooked. Why is this? Well, it may come down to how historians have worked in particular subject silos.  Sailortown sits at the cross-roads between the urban and maritime realm and, because of this, it has traditionally fallen between these two schools of history. Thus, historians became blinkered into examining either the land or sea and, consequently, the waterfront, which was a crucible for this fusion of urban and maritime cultures, was forgotten. END_OF_DOCUMENT_TOKEN_TO_BE_REPLACED 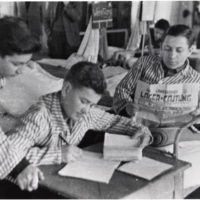 History has not been kind to refugees. By this we mean that refugees are shadowy figures, making only a fleeting appearance in the pages of history books, where they are usually either portrayed as miserable flotsam and jetsam, the inescapable but transient, anonymous and speechless ‘victims’ of war or revolution, or characterised as a threat to political stability and public health. Their absence from the historiography also reflects the view that refugees have left behind few traces in the historical record. END_OF_DOCUMENT_TOKEN_TO_BE_REPLACED 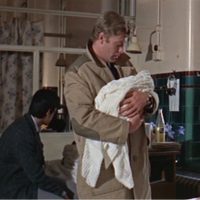 This blog post focuses on the changing status of lone fatherhood from the 1960s through to the 1980s. The extraordinary example of Peter Jeffcock, a bachelor who had adopted 12 children through the London County Council in 1959, was at odds with the bachelor playboy evident in popular culture through films such as Alfie, which  reinforced the impression in the 1960s that single men and children did not mix. During the 1970s the relationship between lone fatherhood and masculinity became a subject of increasing interest to sociologists and NGOs such as Families Need Fathers, while also filling many column inches in the British press. It took the 1974 Finer Report into One Parent Families and sociological research such as Dulan Barber’s Unmarried Fathers in 1975 to significantly change the conversation around lone fatherhood and masculinity, and the 1989 Family Law Reform Act (which granted unmarried fathers automatic access to their children) was a testament to how much had changed over the previous three decades. END_OF_DOCUMENT_TOKEN_TO_BE_REPLACED 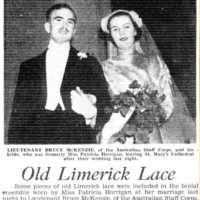 My article for the latest issue of Social History focuses on Limerick lace to explore how women religious (or nuns) used the lace to bond women together, across the Irish diaspora, as designers, manufacturers, and consumers. It uses the wearing of lace veils to consider how women used fashion to present different assets of their identity to the world, particularly on special days like their wedding. In 2014 I wandered around the farmers’ market at the Abbotsford estate on the outskirts of Melbourne. While I knew that Abbotsford had been a convent, I didn’t realise that it had been home to Irish members of the Good Shepherd order, a Magdalen Laundry, schools, and a workshop which made Limerick lace, a prized textile worn by the aristocracy. The religious estate brought together workshops, schools, ‘reform’ institutions, and religious housing in order to both fund and minister to the women and children of Melbourne. It is these links, between reform, finance, and ministry, that are focused upon in ‘Something borrowed: women, Limerick lace, and community heirlooms in the Australian Irish diaspora’. END_OF_DOCUMENT_TOKEN_TO_BE_REPLACED

German occupation policies in Norway diverged greatly from those in Eastern and Southern Europe. The Nazis considered the Scandinavians as “racially valuable Aryans” and sought to win their support by presenting themselves not as occupiers, but as brothers who defended the Norwegians against Bolshevist terror and an imminent British attack. The curbing of liberties, increasing material restrictions and the brutal persecution of the small Jewish community as well as those openly opposed to Nazi rule were accompanied by an apparent economic upswing; the Germans’ insatiable demand for labour and supplies brought an end to long-term unemployment and allowed fishermen and farmers to pay off their debt. END_OF_DOCUMENT_TOKEN_TO_BE_REPLACED 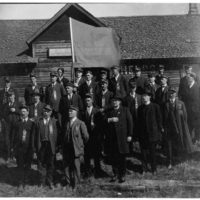 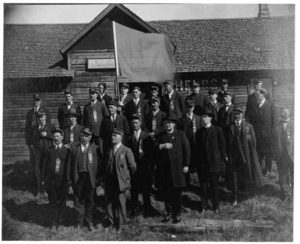 Using nineteenth-century American newspapers, held mainly in the digital repositories of the Library of Congress, Chronicling America, I was able to piece together the history of US Hibernianism from its emergence in the 1850s until its first major public rift in 1884. The resulting article, published in the current instalment of Social History, focusses on the class tensions within this ‘broad church’ nationalist movement. END_OF_DOCUMENT_TOKEN_TO_BE_REPLACED 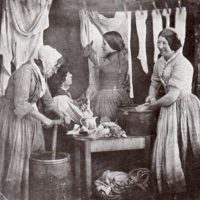 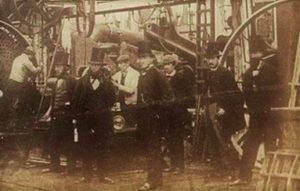 an engineering or steel factory employing hundreds of workers, and generally pictured with an impressive moustache. But men like that were only the tip of a very large, and much more diverse entrepreneurial iceberg. My research shows that close to 30% of businesses in Victorian Britain were run by women, a proportion that was much larger than hitherto estimated. This work is based on the new British Business Census of Entrepreneurs, created at the University of Cambridge as part of the project ‘Drivers of Entrepreneurship’ under Professor Robert Bennett. END_OF_DOCUMENT_TOKEN_TO_BE_REPLACED

By the last quarter of the nineteenth century, Liverpool Borough Prison [1] had a rather unwelcome claim to fame, reputedly having the largest population of female prisoners in the country and possibly Europe. Many of these women, largely Irish migrants to the city, mostly Catholic, and often young, became involved in prostitution on reaching Liverpool, and were committed on charges of soliciting, vagrancy, or of being drunk and disorderly. END_OF_DOCUMENT_TOKEN_TO_BE_REPLACED