History has not been kind to refugees. By this we mean that refugees are shadowy figures, making only a fleeting appearance in the pages of history books, where they are usually either portrayed as miserable flotsam and jetsam, the inescapable but transient, anonymous and speechless ‘victims’ of war or revolution, or characterised as a threat to political stability and public health. Their absence from the historiography also reflects the view that refugees have left behind few traces in the historical record.

In our research, funded by the UK Arts and Humanities Research Council, we challenge these assumptions. We draw upon insights from social and cultural history to establish how refugees expressed themselves in different places, at different times and in different registers during the twentieth century. We make use of abundant archival material that discloses refugees’ readiness to express their hopes, expectations, demands and disappointments. Under the rubric, “Reckoning with Refugeedom: Refugee Voices in Modern History” we contribute to the growing field of refugee history.

Each relationship discloses a history of mixed and sometimes contradictory and irreconcilable motives, ideologies, expectations, anxieties that need to be contextualised and explained. This is the matrix that we define as ‘refugeedom’. Refugeedom rests upon asymmetrical power relations and multiple constraints, but this does not mean that refugees were unable to make themselves heard.

Our archival sources illuminate the trajectories and voices of refugees in Europe, South Asia, the Middle East and Sub-Saharan Africa across half a century of wars, decolonization and the formation of new states. The challenges of addressing such a great range of material are of course immense and require a collaborative effort that draws upon our collective knowledge and linguistic expertise. We have of necessity been selective. In our forthcoming article for Social History 46.1, we have examined letters and petitions from different contexts, to shed light on the experiences, perspectives, and expectations of refugees. We make no claim that this material amounts to a ‘representative’ cross-section of refugees. Instead, we are interested in how refugees ‘wrote upwards’ to those who exercised authority over them, how this written evidence was inflected by distinctions of class, gender, age, and ethnicity, and how the encounter between refugees and officialdom played out.

In looking through the surviving written record, we consider the form and tone in which refugees expressed themselves. Many of them were perfectly clear that their demands, whether for recognition and legal protection, for travel papers, or for financial support and employment, should be addressed to powerful institutions, whether the League of Nations in the inter-war period, the International Refugee Organisation in the immediate aftermath of the Second World War, or the Office of the United Nations High Commissioner for Refugees (UNHCR), established in 1951 and still in existence today. 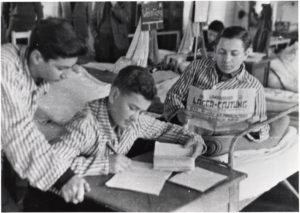 Sometimes, refugees were less certain about the appropriate office to which to address themselves. In the late 1940s, for example, Displaced Persons (DPs) – those individuals who had been forcibly uprooted to work in the Nazi war economy and who were in many instances unwilling to return to their homes – sometimes incorrectly addressed letters to the ‘International Organization for Stateless’, ‘Humanitarian Association’, ‘Misplaced [sic] Persons United Nations Organization’. This might be written off as confusion or ignorance, but it points to a generalised awareness of institutional provision. Indeed, it corresponded to the kind of inventiveness that characterised regular changes in institutional nomenclature.

In making requests of various kinds, refugees expressed themselves in various registers. Many letters and petitions are characterised, not surprisingly, by supplication and humility, but there is abundant evidence also of anger and assertiveness, as in the case of refugees in India following Partition in 1947, unsupported by any intergovernmental organisation, who complained that officials in the new state had failed to guarantee their rights as citizens and were consequently being left to their own devices. Some – such as a group of Lithuanian DPs in post-war Germany – objected to the official script: ‘there is no DP problem at all! There is only one problem and that of right and justice’.[2]

To be sure, these records, like the confidential case files of UNHCR, regularly display irritation on the part of officials. But we can also interpret this as an indication of refugees’ assertiveness and persistence: an insistence on their part that they should not be cajoled into accepting a decision that they deemed to be unsatisfactory or unjust. Other refugees engaged in flights of imagination and fantasy, proposing solutions to what was everywhere being described as the ‘refugee problem’.

Stigma and a proposition

One example, not included in our article, illustrates these points quite nicely and is worth quoting at length for the rhetorical tactics that a refugee deployed. In 1953, Hungarian refugee Janos S. wrote to UNHCR in Geneva, explaining that he left the country of his birth after the communist takeover and arrived in Denmark in 1948 where he found work as a merchant seaman without difficulty. Five years later, however, there were already too many Danish men with a mate’s certificate. He was consequently jobless and destitute, despite his qualifications. He accused the Danish authorities of failing to assist (we have retained the idiosyncrasies in his letter):

A country with VIKING traditions … are asking a master mariner … whether his difficulties could be met with a porter’s job after 7 years of real Calvaria [i.e. Calvary], any intellectual refugee in Denmark would find his situation hopeless … My wife, when she heared that upon the intervention of the highest moral authority to secure international justice and fairplay to refugees we would be further punished by ‘forced labour’ far away from my qualifications, has got a shock of despair and without my previous knowledge, impressioned also by the sudden cold of 15 Celsius has engaged herself in a factory for tidying up job, which on account of her brain injury (bomb accident in Gemany 1945) in any moment may prove to be fatal to her as she from 6am to 10am has to wash up the linoleum pavement of 12 office rooms.

He went on to describe his own perspective on his predicament:

As I am in connection with many of the same situation as me suffering under the weight of the stigma ‘Stateless DP’ and I understand fully the state of mind of my ‘fellow prisoners’ between the various ‘Iron Curtains’ existing all over the world, ready to commit even foolishness in order to belong to a ‘State’ where justice and fairplay necessary for our rehabilitation sincerely prevail and our constructive enthusiasm, technical knowledges, sense of honour and duty based upon 1000 years old national traditions are not considered ‘unwanted sweepings’ to be thrown into the dustbin.

At this point he came up with a radical idea:

I propose [that] their sufferences [be brought] to an end by letting them cooperate in building up a ‘State’ of their own in the form of a ‘Reservation’ following the noble example of the USA where by Constitution there was given a place to the Indians under the Sun. I have many practical ideas for solving this question of the Refugees. [3]

Needless to say, these instances of ‘writing upwards’ often provide no clue as to the eventual outcome. Many case files in the extensive archive presently managed by UNHCR contain puzzles that are impossible to solve. To take just one example, a typewritten letter addressed to Sadruddin Aga Khan (UNHCR High Commissioner between 1965 and 1977) as the ‘Commissioner of Protection’ [sic] in August 1969, is from ‘the undersigned Arze R.’. He explains that he and his family came to Pakistan from Afghanistan to visit an imam, but were denied re-entry to Afghanistan, ‘as they said you are not our Government’s subject’. They decided to travel to Iran, where they were currently sheltering. Arze goes on to add more detail:

Our Native [sic] is China Sinkiang [Xianjing], and we have been driven out to Afghanistan, all our properties, land and every thing belonged to us left behind at China’s confiscation. What we could save was our life of family which we fled to Afghanistan. 4 Four villages, Gardens, hourses [sic] and 800 acre of land confiscated by Chinese without paying even a single penny to us. Now we are wandered and having no money for our expenses at the being time, we have no one to look after us in this wide world.

As winter approached, they had no choice but to return to Afghanistan, ‘wether permited or not’. There is nothing else on file, and it is unclear who typed the letter in English. Evidently this was a Uyghur Muslim family whose name was anglicised for the file. There is no indication as to their eventual fate or what Sadruddin thought of the circumstances surrounding their original expulsion from Xinjiang, if indeed this is what had happened in the first place. [4]

Notwithstanding these tantalising archival fragments and traces, and the inevitable and noisy bureaucratic presence, there is no shortage of personal testimony and a polyphony of refugee voices that provides the building blocks of a new and exciting refugee history.

Peter Gatrell teaches modern history at the University of Manchester. In addition to books on Russian economic and social history, his publications include a trilogy on refugee history: A Whole Empire Walking: Refugees in Russia during World War 1 (1999); Free World? The Campaign to Save the World’s Refugees, 1956-1963 (2011); and The Making of the Modern Refugee (2013). He co-edited Europe on the Move: Refugees in the Era of the Great War (2017). His latest book, The Unsettling of Europe: the Great Migration, 1945 to the Present (2019) is now in paperback. He is a Fellow of the British Academy and a Fellow of the Academy of Social Sciences.

Katarzyna Nowak is an AHRC-funded Research Associate at the University of Manchester, working on the project “Reckoning with Refugeedom: Refugee Voices in Modern History, 1919-1975”. Her research focuses on narratives of people displaced as a result of the Second World War. Her work has appeared in Cultural and Social History, Immigrants and Minorities, and elsewhere. She is currently finishing her first monograph entitled “Kingdom of Barracks. Polish Displaced Persons in Allied-occupied Germany and Austria, 1945-1952”.

[3]  UNHCR Records and Archives. Geneva, Confidential Case Files, IC11515. We have been unable to find out more about Janos S.