‘Sailortown’ was a seaport’s urban quarter where sailors would stay, eat, drink and be entertained.  It was a transient and liminal space and a unique site of cultural contact and exchange. Despite the rich array of research areas in class, race and gender relations that these districts have to offer, sailortowns have tended to be overlooked. Why is this? Well, it may come down to how historians have worked in particular subject silos.  Sailortown sits at the cross-roads between the urban and maritime realm and, because of this, it has traditionally fallen between these two schools of history. Thus, historians became blinkered into examining either the land or sea and, consequently, the waterfront, which was a crucible for this fusion of urban and maritime cultures, was forgotten.

It was for this reason that, over ten years ago, we established our research group Port Towns and Urban Cultures that sought to explore the port’s relationship with its urban hinterland.[1] For example, Lou Moon, one of our early PhD students, produced a stunningly detailed analysis of naval ‘sailorhoods’ in Portsmouth.[2] With Lou’s help we were able to transform the data of over 6,000 sailors into an interactive map.  Likewise, my colleague Mel Bassett recently gave viewers of Channel 4’s Britain’s Most Historic Towns programme a tour of the seamier side of Portsea’s nineteenth-century sailortown. Mathias Seiter has explored Kiel’s sailortown in Germany, and Tomas Nilson (Halmstad University, Sweden) has examined masculinity, sailors and dockers on Gothenburg’s waterfront.[3]These rewarding research avenues have led my colleague Rob James, Isaac Land (Indiana State University, USA) and Joana Gaspar De Freitas (University of Lisbon, Portugal) to forge a new and exciting pathway in establishing the soon-to-be-launched Coastal Studies and Society journal that, among other things, intersects both urban and maritime histories.

This research, along with Graeme Milne’s People Place and Power on the Nineteenth Century Waterfront (2016) and Christina Riemann and Martin Öhman’s Migrants and the Making of the Urban Maritime World (2021), has given a new impetus to explore both urban and maritime history in an innovative and creative way.[4]  It is within this context I embarked on my research on London’s sailortown between 1850 and 1900.

The sailortown historiography to date has generally focused on the traditions, dress and the culture of sailors ashore, the ‘sailorhoods’ where they lived and the welfare missions that sought to ‘civilise’ them.[5] It also documented how they became ‘entangled’ in vice and crime during their drinking ‘sprees’ ashore.  Since my own research background was in researching working-class culture within the broader contexts of leisure, work and empire, I wanted to take a slightly different approach and focus on the relationship between sailors and working-class communities.[6]

While the eighteenth-century sailor in Marcus Rediker’s account cuts a radical figure at sea, historians have not tended to explore their associations with urban working-class culture.[7] They hardly get a mention in E.P. Thompson’s seminal The Making of the English Working Class (1963) and are perceived as rather transitory characters who had no anchorage in working-class urban life. Historians’ portrayal of sailors as transitory characters reflects the contemporary middle-class social investigators’ reflections on the seafarer’s position in society.  In his monumental investigation into the Victorian labouring poor of London, Henry Mayhew categorised workers’ morality and standing in society through the stability of their occupation. Given this criterion for measuring morality, it is perhaps no surprise that Mayhew regarded sailors’ spendthrift reputation as a trait that would lead them into destitution if left to their own devices on land.[8] 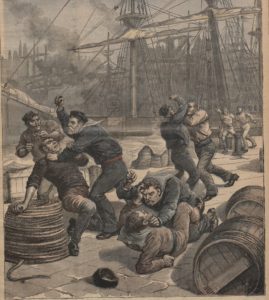 Indeed, Mayhew viewed the urban and maritime worlds as entirely separate entities and he regarded seamen ashore with great suspicion and liable to be ‘professional beggars’.  He claimed that ‘a real sailor is seldom or never seen inland’ and ‘rarely brags of what he has seen, or done. In these respects and all other respects he is the exact opposite to the turnpike sailor [the professional beggar]’.[9] This attitude is perhaps epitomised by Jack London’s decision to disguise himself as destitute American sailor in his immersive study of poverty stricken London in People of the Abyss (1903). London presented himself as the tragic sailor figure, stranded in a ‘strange and terrible land’ and, due to his exuberant living, and urban naivety, was unable to keep his money, clothes or dignity.[10]

This separation of the sailor from the urban world is odd, since seafaring was a demanding working-class occupation and, when in port, sailors often lived in similar densely populated working-class districts situated around the globe. Moreover, for some merchant sailors their occupation was seasonal as they were reliant on the trade winds.  Sailors would often work in the docks or other manual jobs around the district until they could secure a place on another voyage.  Moreover, with the onset of the steamship in the middle decades of the nineteenth century, commentators perceived a change in the characteristics of the sailor.  The traditional sailing ship mariner, who was steeped in maritime culture and skilled in the manipulated ropes and sails, was being replaced by a new and altogether more proletarian sailor.  Steamships required ‘firemen’ or stokers who kept the engines fed with coal and worked in conditions more akin to the factory or coalfield than the sailing ship.  The stoker and the ‘trimmer’, the man or boy who cut out the coal, were the toughest of jobs.  Both worked for long hours in soaring temperatures in the bowels of the ship with little air or light. Invariably, these men were drawn from the labouring urban working class.   All of which, you would have thought, demanded that sailors had a knowledge of working-class traditions, customs, work and leisure practices.[11]

The Social History 46.1 article, then, is my attempt to re-establish the sailor within the urban world and explore his engagement with working-class culture in a multi-ethnic environment.  London provided the ideal case study to explore this relationship between sailors and working-class communities. It was home to the largest port in the world and accommodated sailors from around the globe in a condensed street full of boarding houses and entertainment venues close to the London docks. This strip of land was the infamous Ratcliffe Highway, which was portrayed by the press as a ‘sailors bacchanalia’ and a den of drunkenness, vice and murder.  At the heart of this narrative was the knife-wielding foreign sailor who brought disorder and mayhem on to London streets.  However, taking the Old Bailey court records, press reports and census evidence together, the most striking feature of Ratcliffe Highway was the numerous opportunities that sailors had to mix with the local community, which transformed the area into an international contact zone.  Census material revealed that boarding houses that, from the outside appearance catered for only one nationality, provided for sailors across the globe. Similarly, pubs and singing saloons were not exclusive to one nationality or another.

As the article argues, these contact zones enabled sailors to familiarise themselves with a variety of street-wise customs that defended one’s masculinity. These customs often ran contrary to the popular portrayal of a Highway of murderous anarchy. Indeed, once we place both foreign and British sailors back into their urban environments, their roots within working-class culture become apparent and help us explain how they navigated themselves through the complex ethnic and social traditions that operated in this district of London.

Brad Beaven is a Professor of Social and Culture at the University of Portsmouth.

[7]  M. Rediker, Between the Devil and the Deep Blue Sea: Merchant seamen, pirates and the Anglo-American maritime world (Cambridge , 1987).

[11] B. Beaven, ‘From Jolly Sailor to Proletarian Jack: The Remaking of Sailortown and the Merchant Seafarer in Victorian London’, in Beaven et el (eds), Port Towns and Urban Cultures, 168.