Inequality has recently emerged as a central preoccupation in public policy debate. What has driven this is the mounting evidence that in the last three decades there has been a decisive shift towards greater inequality after a period in which inequality was declining. This ‘Inequality Turn’ in the 1980s is one of the most distinctive aspects of contemporary political economy. It was not predicted. The consensus amongst economists and economic historians in the 1950s was that the sharp falls in inequality which had occurred as a result of two world wars and the 1930s slump were permanent and irreversible. Lower inequality was associated with full employment, high rates of growth and productivity, and societies which were both much more prosperous and more socially cohesive than in the past.

There have been many important books on inequality in recent years, including Kate Pickett & Richard Wilkinson The Spirit Level, Joseph Stiglitz The Price of Inequality, and Thomas Piketty, 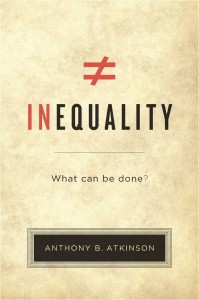 Capital in the Twenty first century, which became a rather surprising bestseller in 2014. Now Tony Atkinson has produced a major book of his own.[1] He has worked closely with Piketty in recent years, particularly on assembling long-run data sets on inequality for different countries. But although they are close collaborators there are some important differences between Piketty and Atkinson. They come from different traditions of economic analysis, and Atkinson does not make use of the vivid depiction of different historical eras in the development of inequality which is so marked a feature of Piketty’s work. Atkinson also does not employ the particular formula which Piketty uses to great effect to show that there is an inexorable tendency at work within capitalism to deepen inequality. Atkinson’s approach is instead derived from James Meade.[2] It is a tradition which reaches back to John Stuart Mill and is concerned in particular with the design of institutions that will produce better and fairer economic outcomes.

Tony Atkinson has been researching and writing on inequality for forty years, long before the recent resurgence of interest. He is rightly acknowledged as the leader in the field. This present book is a summary of his research and also a manifesto of what needs to be done to start to reverse the trends toward ever greater inequality. The first third of the book is diagnosis, but fully two thirds is devoted to what can be done to tackle the problem. The balance in Piketty is very much the reverse. The analysis of the problem of inequality, how it emerged and how it is likely to develop is exceptionally full and detailed, remarkable for its historical scope. Piketty’s analysis of what can be done about it is relatively brief and has attracted considerable criticism for its political naivety. Atkinson offers a much more detailed examination of the policies and changes which might make a difference. He sets out proposals which he thinks could achieve a significant reduction in inequality, and discusses political feasibility. The focus is very much on the UK, but the approach is intended to be relevant to other advanced democracies and to be capable of giving rise to policies tailored to their specific circumstances. Some of the proposals are a return to the classical instruments of progressive taxation and social protection, complemented by what has recently been termed ‘predistribution’, but is a much older idea, one which was developed in particular by James Meade, and the tradition of thinking about inequality to which Tony Atkinson belongs. The core of this idea is that to combat inequality effectively there need to be measures to make the incomes people receive before government taxes and transfers more equal. As Atkinson puts it, ‘Today’s high level of inequality can be effectively reduced only by tackling inequality in the marketplace.’[3]

In the first part of the book Atkinson has two aims – to establish the dimensions of the problem and to explain why inequality matters, and specifically why inequality of outcome matters. This concern swims against the mainstream of modern economics, and also Rawlsian political philosophy, with its concern for process and rules, but as Atkinson notes it has a much longer pedigree. Plato for instance argued that no-one should be four times richer than the poorest member of society. Contemporary societies are a long way from that. Currently it is common for CEOs to be paid four hundred times the wage of the lowest paid member of their company. Atkinson acknowledges that he is a heretic, thinking like John Stuart Mill that it is not only important to study how wealth is produced but how it is distributed. This is not the view of Robert Lucas: ‘Of the tendencies that are harmful to sound economics, the most seductive, and in my opinion the most poisonous, is to focus on questions of distribution’.[4] Atkinson’s counter to this is that different patterns of inequality which have been observed historically have a huge impact on social cohesion and poverty, the isolation of the rich in their gated communities as well as the poor in their ghettos. They should be of great interest to economists, and undoubtedly will be to economic historians. The divergence since the 1980s in the patterns of inequality and the generosity of the welfare states in the advanced democracies is marked. Yet those countries like the US and the UK which have seen the greatest widening in inequality have not been rewarded by higher rates of economic growth. Economic growth has been noticeably lower in the last thirty years for all economies than it was in les trentes glorieuses after 1945. Countries with high inequality and less generous welfare states tend to have lower social cohesion and lower trust, but their economic growth is no higher.

Atkinson does not dispute that there are some structural factors which help explain the move towards greater inequality and which make the task of countering it that much harder. Chief among them are technological change and the changing balance of power in the workplace. But he sees them as a spur to action rather than fatalistic resignation. His fifteen proposals are detailed policy ideas intended to tackle the problem in a number of different ways. No single one on its own is the solution, but if a large number of these ideas were adopted by a reforming government, considerable progress could be made. Among the proposals are measures to ensure that innovations increase rather than decrease employability; redressing the balance of power between labour and capital; full employment policies, including guaranteed public employment at the minimum wage to all those who seek it; a national pay policy which prescribes rules both for the minimum and the maximum wage; progressive income tax rising to 65p in the £, reached at incomes of £200,000, with more intermediate bands (Atkinson argues forcefully that rates of income tax at this level have been in force for nearly half the last hundred years and that the consensus that rates cannot be higher than 40p has no economic justification); capital grants to all at 18; generous social security achieved in part by payment of a participation income to all citizens; inheritance taxes: a public investment authority or sovereign wealth fund, charged with building up the net worth of the state by holding investments in companies and property; and overseas development assistance to be raised to 1 per cent of Gross National Income.

It is a powerful and persuasive case, all the better for getting into the detail, and for the careful and precise way the evidence is sifted and conclusions reached. Above all it is hopeful. Atkinson has no time for fatalism. Globalisation is a constraint but it does not prevent action. This book is a fitting summing-up of a research career dedicated to understanding the causes of inequality and to finding ways to counter them.

Andrew Gamble is Professor of Politics at the University of Cambridge.

[2] See for example J. Meade, Efficiency, Equality and the Ownership of Property. (London, 1964)