After the October revolution of 1917, venereal diseases formed part of a long list of social phenomena that Soviet leaders deemed completely incompatible with socialist society. Not only were these diseases remnants of the decadence and corruption of the bourgeois capitalist past, their debilitating effects endangered the construction of the new state and way of life (byt’). Venereal diseases were diagnosed and treated as part of the field of ‘social hygiene’, driven by the idea that they were both biological and social phenomena, best understood within their social context.[1] In light of this, Soviet officials emphasised the need for an urgent ‘struggle’ (bor’ba) against what they perceived to be the main causes of infection: prostitution, promiscuity, and poor hygiene. Official responses to the problem of venereal diseases swung between repression and welfare, advocating patient confidentiality on the one hand, and justifying interventions into the private sphere on the other.

A vivid illustration of this inconsistency can be seen in the city of Sevastopol in 1927. In this year, much to the horror of high command, sailors in the Black Sea fleet had the highest levels of venereal infection of any naval fleet in the world. Over fifteen per cent of all sailors were infected in the Black Sea fleet, compared with just under ten per cent for the entire Red Navy. The commander of the Soviet Naval Forces, Romuald Muklevich, found it particularly embarrassing that Black Sea sailors had overtaken the US Navy, who had apparently always ‘stood out amongst capitalist fleets’ in terms of venereal diseases.[2] 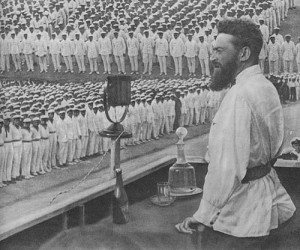 Head of the Political Administration for the Red Army Ia. B. Gamarnik speaking at a rally for Black Sea fleet sailors, 1933

Following this shocking revelation, naval high command and Sevastopol city authorities put forward several recommendations to combat epidemic disease. They advocated the close monitoring of sailors’ leisure time, the compulsory use of post-coitus prophylactics and increased health propaganda. In all of their recommendations, the source of venereal diseases was thought to be female, normally homeless or unemployed women who became prostitutes due to economic hardship. Even though prostitution was officially decriminalised following the October revolution, state authorities swung between rehabilitating and repressing women who worked in the commercial sex industry. Sevastopol’s city authorities and naval command reflected these two different approaches in their attempts to eradicate the supposed font of infection.

The Sevastopol Soviet was keen to open a labour dispensary (trud profilaktoriia) in the city as part of the ‘struggle’ with venereal diseases. These institutions offered women infected with venereal diseases (in most cases, prostitutes) paid employment, lodgings, free medical treatment and the opportunity to learn a trade. The use of the labour dispensary to eradicate prostitution and venereal diseases illustrates that the early Soviet government regarded prostitution solely as an economic problem, and a profession that women turned to only in the absence of other work. This was in contrast to the pre-revolutionary period, when many educated observers explained women’s entry into prostitution as a result of naivety and moral laxity, as well as poverty. From 1924, labour dispensaries emerged in Moscow and other major cities. In popular culture, the institutions were portrayed as overwhelmingly successful in reforming prostitutes into productive and conscious workers.

A depiction of the labour dispensary from the 1926 film ‘A Prostitute, Killed by Life’ (Prostitutka, Ubitaia Zhizn’iu) directed by Oleg Frelikh. The protagonist, Liuba, is seduced into prostitution, exploited, and then admitted to the labour dispensary where she becomes a vocal advocate for the institution.

Despite the apparent overwhelming success of the labour dispensary, the Soviet government often did not provide regional authorities with adequate funds to ensure that one could be opened within each major city. In 1925, seventy-five per cent of all the Soviet Union’s labour dispensaries were financially dependent on the central Commissariat, who often could not provide the necessary funding.[3]  Instead of waiting for financial support from the central government, the Sevastopol Soviet called on city residents to donate their money and time through subbotnik, days of mass volunteering on weekends for the Soviet cause. In a 1927 newspaper article from the official newspaper of the Black Sea fleet, Krasnyi Chernomorets, the Sevastopol Soviet had apparently convinced employees of the political department to donate half of their salaries to the cause and now called on workers from the department of safety and navigation to follow suit.[4] The actions of the Soviet indicate that city authorities in Sevastopol regarded the eradication of venereal diseases and prostitution as a ‘struggle’ that involved the whole of society. City residents had a societal responsibility to help reform economically vulnerable prostitutes into workers.

Naval authorities in the Black Sea took a different approach in their recommendations for how best to root out the source of infection. High command divided prostitutes into two camps: victims and villains. Single, unemployed, and homeless women were the victims in this scenario, and they were to have priority access to the labour dispensary. In contrast the villains were class enemies; promiscuous women from the ‘petty-bourgeois masses’ who apparently engaged in both ‘free and paid casual sex’.[5] These women apparently were not prostitutes because of economic need, and instead spread disease maliciously and deliberately damaged the socialist cause. In February 1928, an article in Krasnyi Chernomorets called on city residents once again for assistance, but this time they were to ‘root out’ malicious prostitutes, the so-called ‘black spot’ on Soviet society, and report them to local law enforcement agents. The Sevastopol district committee even advocated the eviction of ‘malicious prostitutes’ from the city, and the liquidation of the brothels in which they worked.

Despite their different interpretations of, and approaches to, eradicating the source of venereal diseases, both the Sevastopol Soviet and naval command in the Black Sea emphasised the need for the whole of society to be actively involved in ‘struggle’. Donating money, volunteering, and exposing ‘malicious’ women were all key societal responsibilities of the Soviet citizen. Early Soviet legislation further reinforced this sense of personal responsibility. For example, Article 150 of the 1926 Criminal Code criminalised the transmission of venereal diseases and Article 132 of the 1926 Family Code stipulated that couples were obliged to share information about their sexual health on the registration of their marriage, or face prosecution. Additionally, a government decree of 1927 authorised the forceful examination and treatment of infected individuals if they had already refused voluntary treatment for venereal diseases, regardless of gender. In both law and state-led campaigns, state collective interests were prioritised over the privacy of individuals. In the 1920s, Soviet citizens had a duty to keep their own bodies healthy and prevent the contamination of others for the good of the new socialist society.

Siobhan Hearne is an ESRC doctoral candidate at the University of Nottingham, currently finishing her thesis on the regulation of female prostitution in urban Russia, 1900-1917. More generally, her research examines sexuality in late imperial Russia and the early Soviet Union. She is part of the Peripheral Histories? Editorial team, a digital history project which focuses on Russian, Soviet and post-Soviet localities, provinces and republics. Siobhan’s article on Soviet responses to venereal diseases in the Crimea is available to read in Social History 42:2.