I first became interested in the issue of banditry in early modern Scotland while writing my PhD thesis on the government of the Highlands during the Restoration (1660-88). Wading through government papers, there seemed to be nothing short of an obsession with the depredations supposedly being committed by brigands and ‘broken men’, and indeed responding to these outlaws was apparently the single biggest issues that both Charles II and James VII & II felt themselves to be facing in the Highlands. Once the thesis was out of the way, I decided to probe the issue a little more deeply, aiming to gauge just how much of an issue banditry actually was in seventeenth-century Scotland, while also hoping to understand what it all meant.

It very quickly became apparent that I could not avoid the provocative work of Eric Hobsbawm. Since it was first articulated in 1969, his model of ‘social banditry’ – which posited the existence in pre-modern societies of a special form of banditry driven by class protest against social elites – has fuelled much of the scholarly debate, with numerous historians seeking to endorse, rubbish, or nuance his ideas. While this discussion often generated rather more heat than light, it has served to expand our understanding of banditry quite substantially, and has forced historians to be much more sensitive to the social meaning of bandit activity, meaning that could vary widely from locale to locale.

In a specifically Scottish context, banditry has typically been explained with reference to the clan system, that peculiarly Highland form of social organisation which saw social and political authority organised around extended family and kin groups. In reality, however, most bandits were not paid-up members of Highland clans, but rather ‘broken men’, essentially vagabonds who, in the words of one commentator from the 1670s, lived ‘without owning any awthoritie, landlord or maister’.[1] For such individuals, banditry tended to represent a last-resort means of earning a living. Sometimes they were driven to this extreme by social or political pressures; Calum Oig McGrigor, for instance, appears to have become a bandit in the early 1660s after becoming embroiled in a sex-scandal in his native parish of Callendar, while Alasdair MacRanald of Gargavach became a ‘broken man’ after being outlawed for adherence to a rebellion on Islay in 1615.[2] A more typical motivation, however, was poverty, which was certainly the issue cited by Alasdair Mor, who explained in 1702 that he had slipped into banditry ‘from necessity’.[3] Banditry, then, was seldom the result of deep structural or cultural dynamics of Highland society, but rather an individual response to straitened personal circumstances.

Once the individual had embraced a bandit lifestyle, most brigands operated according to a broadly similar template. Their stock-in-trade was typically cattle-theft, usually on a relatively small scale, but sometimes not: the gang of Lachlan Mackintosh (d.1666) for instance launched a well-planned raid on Balchirie, Banffshire, in 1665, making off with around 80 head of livestock.[4] Other criminal activities abounded, however, and bandits are also known to have indulged in kidnapping, murder, extortion, racketeering, and a practice known as ‘sorning’, which involved the forcible extraction of free board and quarter from members of the public. Underpinning all of this, of course, was significant violence, sometimes purely facilitative, but also, on occasion, clearly as a tool of psychological warfare. The manner in which the notorious Restoration-era brigand Patrick Roy MacGregor disposed of the bodies of two victims, John and Alexander Lyon – lying on the braes of Abernethy ‘naked and stript, full of wounds [from] hagbutts pistolls and dirks’ – suggests an attempt to use the corpses as a device of intimidation.[5] High levels of mobility and a propensity for working in moderately-sized gangs of a few dozen men were the final core hallmarks of the Highland bandit. 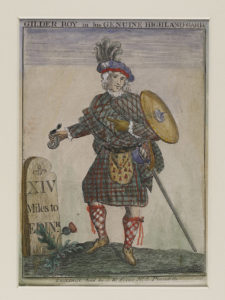 With all this in mind, we can return to the Hobsbawmian framework to help unpick the social meaning of Highland banditry. The gangs committing these outrages were clearly not ‘social bandits’ in Hobsbawm’s understanding, although there is some limited evidence that one of them – Patrick ‘Gilderoy’ MacGregor (d.1636) – enjoyed some limited posthumous romanticisation. Similarly, there is precious little that suggests significant popular support for bandits, beyond the kind of forced provisioning secured via ‘sorning’. Instead, if bandits enjoyed support, it seems to have come more typically from social elites. Bandit gangs could be used as hired muscle to help noblemen or clan elites protect their local interests, with the most notorious example being Charles Gordon, 1st earl of Aboyne, to whom Patrick Roy MacGregor reputedly served as a personal ‘dark operations’ specialist throughout the early 1660s.[6] Bandits’ success, therefore, had more to do with elite than popular patronage; far from being scourges of social hierarchy in the Hobsbawmian mould, these individuals were in fact very often dependent upon it.

Hobsbawm’s ‘social banditry’ was, of course, never intended as a model of all forms of rural brigandage, and as such it is neither especially surprising nor particularly noteworthy that the Highland experience diverged from it. What is important, however, is that scholars, in responding to Hobsbawn, have developed a sophisticated comparative framework that emphasises how far banditry as a shared toolkit of deviance could be adapted to local conditions. In the Scottish case, this helps us conceptualise Highland bandits as case-studies of social marginalisation. They were individuals whose deviation from expected behavioural norms earned widespread hostility that, in turn, deepened their outsider status. At the same time, however, either by turning a blind eye, offering protection or providing employment, bandits’ success and longevity largely depended on their ability to secure alliances among the regional gentry and aristocracy. Placing Highland banditry in its wider historiographical context, therefore, allows for a fuller understanding of its roots, nature and significance.

In turn, the Highland evidence can contribute to wider understanding. Distinctively Scottish in its details, Highland banditry can be understood, in general terms, as an environmentally-determined response to personal crises of survival, rather than as an expression of social, economic, or cultural alienation in a corporate sense. Sometimes, as seventeenth-century Scotland shows us, banditry had no deep social meaning; a bandit was a bandit simply because that was their best chance of earning a living. There is a still wider consideration, too, rooted in the relationship between bandits and social elites. Scotland was a highly decentralised society, with the key levers of control tending to lie with local grandees. This allowed the ostensibly normative threat of the bandit to be contained, and in some cases redirected back into the dense thicket of half-private, half-public jockeying that characterised early modern structures of government. The Highland bandit, then, was not a talisman of peasant revolt against elite oppression, nor an expression of Gaelic resistance to Anglophone imperialism, but an exemplar of the formidable capacity of pre-modern social hierarchies to adapt to, accommodate and even exploit the challenge of disorder.

Allan Kennedy is Lecturer in Scottish History at the University of Dundee. He specialises in the early modern period, with a particular focus on the Highlands, crime, and social marginality.