To rethink the history of disability and employment, we can turn to one of Britain’s most dangerous industries.

Coal was one of the most notoriously dangerous British industries. Many of its most deadly incidents are well known: the Hartley Colliery disaster of 1862 that trapped and killed 204 miners in Northumberland and the 1913 explosion at Universal Colliery in Senghenydd, South Wales, that took 439 lives, to name just two. Yet everyday accidents were equally commonplace. Unlike major disasters, the common accidents, injuries and diseases faced by coalminers are near-impossible to collate and quantify. An estimated quarter of a million miners were killed or permanently injured from 1850-1950, while at least 1 in 50 of mining injuries were permanent.[1] Disability was commonplace in mining communities, but the lives of disabled people themselves have gone mostly unrecognised. 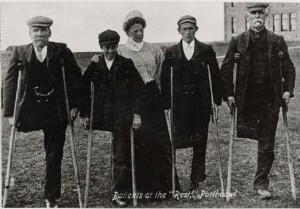 The Rest Convalescent Home for miners, Porthcawl, c.1920. With kind permission of the Disability and Industrial Society Project.

Disability history is crucial to understanding the history of labour in the first half of the 20th century. Our project Disability and Industrial Society uses the coal industry as a case study, aiming to bring to light not just those miners who met with injury or disease while working, but all disabled members of coalfield communities: women, children and disabled workers who continued their jobs or entered the industry out of financial necessity. The last few decades of disability history research have seen new ways of writing disabled people back into their own histories. When disabled people’s voices are unrecoverable, we can read critically into institutional and state records to examine where disability is visible. The social model of disability can be used to examine how environments and attitudes helped create disability in the past. Through records like coal industry records, newspapers, Poor Law records, literature and occasionally the writings of disabled miners themselves, we can rethink the history of disability and employment.

Miners faced innumerable dangers in their work. Falls of roof, explosions from shots and moving machinery were all common causes of accidents. Certain occupational diseases were almost entirely concentrated in mines, including the eye condition miners’ nystagmus and the lung diseases silicosis and pneumoconiosis. By 1938, for example, 78% of new disablement cases in Britain were attributed to the coalmining industry.[2] Compensation was available for permanent injury and disease. The 1880 Employers’ Liability Act guaranteed liability if for injuries that happened in the workplace, and the 1897 Workmen’s Compensation Act legislated compensation for injured and diseased workmen. Both of these, though, received staunch resistance from employers and came with restrictions that rendered them near-impossible to live on. The Employers’ Liability Act allowed employers to “contract out” of the Act and form their own welfare schemes. Compensation from the 1897 act could only make up half of a worker’s wages and came with a two week wait, unthinkable for an industry where, as the former miner B.L. Coombes wrote, ‘even a day out means that someone must go short.'[3] Because of this, compensation almost never became a single solution: injured and diseased workers often relied on a patchwork of welfare, including friendly societies, family income or returning to work as a matter of financial necessity.

One of the major findings of our project is just how many disabled people were at work in the coal industry. Many went unrecognised, but a minority were celebrated. Thomas Sharrock, a blind miner who worked in Pemberton, Wigan, worked his whole working life as a “hooker-on” and “putter”, key underground jobs, as well as being Grand Master of his local Oddfellows. His local newspaper reported on “Blind Tommy”’s life using the now-familiar trope of “overcoming” disability: ‘his infirmity has not debarred him from participating in some life’ with his colleagues.[4]

More common, though, was the offer of “light work”, where injured workers had their previous jobs replaced with work on the surface like coal-sorting or administration work. Almost invariably this was lower-paid and reduced in status. Often the provision of “light work” was framed as a form of paternalism from the employer or as a personal failure of the employee. One Scottish miner who had his right hand “severely crushed” in 1912 took up work at the picking tables. Seemingly unimpressed with this transition, his doctor wrote that ‘he might be able to do a little more if he were trying, and if he were forcibly extending and moving the contracted fingers.'[5]

The question of work even permeated medical discussion of disabled miners who could not return. The very nature of work for disabled people was described as humanizing, and disability as a scale of pain. A compensation claimant in South Wales in 1926, for example, had his union lodge’s doctor talk pityingly about an upcoming operation: ‘Operations of this sort for an already very serious condition may relieve, but one hardly expects to bring these patients out of the invalid class and the operations are undertaken not so much with a view of getting a man back to work as for making his life less intolerable.’ [6] 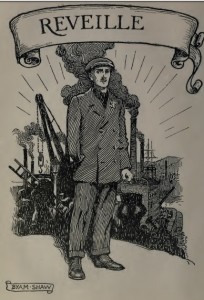 ‘Revielle’ by Byam Shaw From Reveille Magazine No I. (1918) Edited by John Galsworthy

Disabled people, then, had a long history of work in the coalmines. Many were employed on their own terms but often they were limited by poor compensation or framed by medical and industry professionals as humanising or charitable. The events of World War I were to add even more complexity to disabled people’s employment in the collieries. My article in Social History explores this situation by looking at the coal industry’s failure to integrate with both state and voluntary schemes for employing disabled veterans. The National Scheme for the Employment of Disabled Ex-Servicemen, commonly known as the King’s Roll, was a programme that ensured a quota of disabled veterans to employers who signed up. Yet it proved almost impossible for the coal industry to fulfil its requirements. Thus not only did thousands of disabled miners return from the war with no job, they also arrived at an industry that, from its peak before World War I, was about to go into decline. Once again, the failures of state welfare meant disabled members of mining communities had to ensure their own economic survival by any means necessary. Our project aims to write the lives of these disabled people back into history.

Dr Mike Mantin is Research Fellow for the Wellcome Trust project ‘Disability and Industrial Society: A Comparative Cultural History of British Coalfields, 1780-1948’ at Swansea University. You can find more details about the project at: http://www.dis-ind-soc.org.uk/en/index.htm

[3] B. L. Coombes, These Poor Hands : The Autobiography of a Miner Working in South Wales, with an Introduction by Bill Jones and Chris Williams (Cardiff, 2002), 63.