My article for the latest issue of Social History focuses on Limerick lace to explore how women religious (or nuns) used the lace to bond women together, across the Irish diaspora, as designers, manufacturers, and consumers. It uses the wearing of lace veils to consider how women used fashion to present different assets of their identity to the world, particularly on special days like their wedding. In 2014 I wandered around the farmers’ market at the Abbotsford estate on the outskirts of Melbourne. While I knew that Abbotsford had been a convent, I didn’t realise that it had been home to Irish members of the Good Shepherd order, a Magdalen Laundry, schools, and a workshop which made Limerick lace, a prized textile worn by the aristocracy. The religious estate brought together workshops, schools, ‘reform’ institutions, and religious housing in order to both fund and minister to the women and children of Melbourne. It is these links, between reform, finance, and ministry, that are focused upon in ‘Something borrowed: women, Limerick lace, and community heirlooms in the Australian Irish diaspora’. 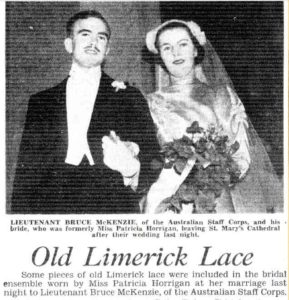 ‘Something borrowed’ uses newspaper reports, available on Trove, to explore how women used Limerick lace to publicly present their connections to school, religion, and ethnicity. Ireland was unusual among European countries during the nineteenth and early twentieth century for its migratory population: those leaving tended to move as individuals instead of in family groups, and (unique amongst European migration streams) the number of women emigrating from Ireland equalled or exceeded the number of men. Despite this, the history of male experience abroad still dominates the historiography, though this is changing. The lack of accessible archival materials left both by women religious and by non-elite women in the late nineteenth and early twentieth centuries has hampered the study of the female Irish diaspora. ‘Something borrowed’ uses freely available newspaper reports to research female relationships within the Irish diaspora through their fashion choices.

Fashion as a ‘key’ to social connections

While the newspaper reports rarely feature my subjects’ voices, their fashion choices feature heavily with detailed descriptions of their clothes and their provenance. Lou Taylor argues that the study of dress ‘is a key which opens the door to a deeper understanding of the developments that take place in society and its social ambitions and aspirations.’[1] The use of fashion choices and descriptions of dress can help us to delve into the lives and aspirations of women who lived ordinary lives, left little in the way of public archives, but for one day were the focus of newspaper columns which we can access. The choice to wear a Limerick lace veil was frequently commented upon by journalists. Part of this was the usual summary of bridal dress – along with the flowers in the bouquet and the decoration of the church – but for many the provenance of the veil was just as important, particularly when it was loaned or hired from an order of nuns. In the settler societies of Australia, where families were frequently spread out across the country or across the world, the wearing of a veil which had a clear history going back generations was important. It was the ‘something borrowed’ which was supposed to bestow luck upon the new marriage.

Why women chose to wear the Limerick lace veil, other than its history, varied greatly and was rarely commented upon in newspaper articles. For some, the veil represented religious and educational connections clearly. For others, the fact that Limerick lace was a proudly Irish craftwork presented an opportunity to highlight their ethnic identity. In addition to an Irish product, it was a high-status item, synonymous with skill, precision, and delicacy. We cannot always know the motivations for fashion choices, but we can discern social connections through those choices.

For Marjorie Mary Hitchens, who got married in 1936, the religious connotations of wearing the Limerick lace veil were clear. The veil had been lent to her by the nuns of the Good Shepherd Convent. She emphasised her connection to both the Catholic Church and her active faith by wearing ‘the blue satin cloak of the Children of Mary as she enters the Church’ and being accompanied by a ‘guard of honor’ made up of ‘Children in Mary in blue cloaks and white veils.’ [2] Georgina Bennett borrowed a Limerick lace veil from the Presentation Convent in Windsor, as well as wearing an overdress of Limerick lace, and visited the Presentation Convent after leaving the church to be ‘entertained by the nuns’ before continuing to the reception. [3] These women had a clear connection to Catholic communities and the loaning of the Limerick lace veil was a demonstration that the kinship was felt in both directions. The women who were lent veils by women religious in the early twentieth century had frequently been at a convent school and were therefore given the veil as a symbol of their continued connection to school and community.

For others, the Limerick lace veil was a status symbol, separate to expressions of faith and ethnicity. Queen Victoria and her daughters wore Limerick lace, as did other aristocratic women, and religious orders presented women with an opportunity to get a taste of this aspirational dressing. Who had access to the veils changed with the place and needs of Catholic female religious orders in Australia. At times, it was an honour bestowed solely upon Catholic women, usually former students of Irish descent. Later in the twentieth century, as the Catholic Church became more diverse and the Irish Catholic population became more financially and socially secure, the veils were lent out for a fee to brides who were marrying in Catholic and Protestant churches. Just as wearing a Limerick lace veil was an opportunity for brides to access high fashion dress, reminiscent of aristocrats and celebrities, the loaning of the Limerick lace veil during the mid-twentieth century was both a way that female religious orders could help their students on their wedding day, and a money-raising opportunity.

When female Catholic religious orders arrived in Australia in the 1840s, and throughout the nineteenth century, they used the beauty of Limerick lace to create spectacles which endeared them to local communities. The ‘taking of the habit’, where novices and postulants joined the congregation, were often similar to wedding ceremonies, featuring bridesmaids, wedding dresses, and the wearing of veils. New religious orders often opened up these ceremonies to curious audiences, sometimes an admission fee was charged in order to pay for new missions, for other religious orders, beautiful and mysterious ceremonies had the benefit of including local girls who might then choose a religious vocation in the future. What began in the nineteenth century as a strategy for religious community inclusion and expansion evolved in the twentieth century when the Catholic Church in Australia was more secure to extend access to the veil in order to fund different missions in new places.

The Ashfield veil, which is studied in detail in the article, featured Australian flower motifs (pictured below) alongside British and Irish flowers. 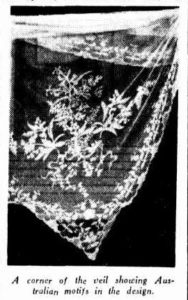 ‘Delicate tracery is seen in the variety of stitches in the more than 30 feet of border, and the four corners are worked with elaborate floral designs. Two corners feature the rose, thistle and shamrock, but in the others, maiden hair fern is depicted, allied with wattle and other Australian flowers.’ [4]

The Limerick lace veil was a proudly Irish good. However, the skills of lace embroidery were derived from Belgian lace making, and when the skills were transported to Australia and developed in the convents of Irish religious orders, new connections were made. Veils like the Ashfield veil took five years to make and were the result of great skill. They provided women with the opportunity to present the different facets of their identity and the various communities that they belonged to. Their voices, priorities, and hopes may not have been featured in newspaper articles, but their choices in fashion can be used to demonstrate the multigenerational social worlds that they inhabited.

Dr Sophie Cooper is currently a teaching fellow in Irish History at the University of Leicester. She completed her PhD at the University of Edinburgh in 2017 focusing on the Irish communities of Melbourne and Chicago during the nineteenth century. Her article ‘Something borrowed: women, Limerick lace and community heirlooms in the Australian Irish diaspora’ is available to read online in Social History 45:3.