German occupation policies in Norway diverged greatly from those in Eastern and Southern Europe. The Nazis considered the Scandinavians as “racially valuable Aryans” and sought to win their support by presenting themselves not as occupiers, but as brothers who defended the Norwegians against Bolshevist terror and an imminent British attack. The curbing of liberties, increasing material restrictions and the brutal persecution of the small Jewish community as well as those openly opposed to Nazi rule were accompanied by an apparent economic upswing; the Germans’ insatiable demand for labour and supplies brought an end to long-term unemployment and allowed fishermen and farmers to pay off their debt.

While for many people life continued much the same, reality also became more complex, forcing people to make choices which could have weighty consequences. What made the situation even more complicated was the everyday presence of a large number of German troops who lived side by side with the Norwegians, sharing the same spaces. How did the people on both sides of the enemy line respond to the situation? How did they interact with each other, and how did these interactions alter the perceptions of and behaviour towards the enemy?

Historians investigating the social and cultural aspects of the German occupation have relied on a variety of sources. Ego-documents such as letters, diaries, auto-biographical writings as well as questionnaires collected by Norwegian ethnographers have proven to be particularly fruitful to establish the experiences and views of ordinary people. These sources, however, present only one side of the story; contacts with the “enemy” are usually only mentioned in passing, if at all.  Yet on a daily level, interactions across the enemy line were frequent. In some parts of the country it was almost impossible not to come into in contact with the respective other. 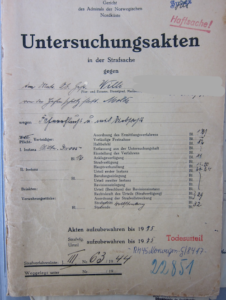 In my Social History article ‘Spaces of Encounter’ I argue for the need to examine the social relations between the occupier and the occupied to reach a deeper understanding of the complex realities of the occupation. For the study I relied mostly on German military (Wehrmacht) court files – a source that despite containing a wealth of information about the occupation has hitherto been overlooked by historians working on the Second World War in Norway.

Apart from giving insights into military life and the struggles of Wehrmacht soldiers within the Nazi and military system, these trial dossiers also contain many traces of contacts between the occupier and the occupied. Through witness statements, procedural minutes, as well as the occasional letters or photographs the reader is given a multi-perspective view on the social reality of the occupation.

As I demonstrate in the article, these court records allow us a glimpse of the varied, shifting and often contradictory social relations that developed between members of the opposing camps during the five years of occupation.

While I analysed hundreds of trials that involved both Norwegians and Germans, it became clear that space played an important role in these encounters. The spatial settings shaped their behaviour and their responses to each other. In order to find out how the norms inscribed onto space might have influenced the interactions between the occupier and the occupied I decided to examine these encounters more closely.

The majority of encounters occurred in public spaces. The German occupiers demonstrated their claim to power through their demonstrative public presence: new street signs appeared, public buildings were requisitioned, German barracks erected, areas cordoned off and declared off limits for the natives.

With around 350 000 Wehrmacht soldiers to 3 million Norwegians, Norway counted the largest German presence in relation to the size of population. The soldiers flooded public spaces, occupied beaches and park benches, crowded into shops and cinemas, filled the tables at the restaurants and bars and took up seats in trams and buses.

The fact that the Germans did not enter virgin territory, but places that were already occupied and inscribed with norms and meaning produced tensions which frequently erupted into verbal assaults or physical attacks. The military trial dossiers are full of incidents where Norwegian civilians – often drunk – rail in public against the occupation, mock Hitler or Quisling, or swear at individual Germans. Others adopted a more physical approach to express their discontent, “accidentally” bumping into passing German soldiers or spitting at them. These conflicts were often  provoked by the overbearing attitude of the occupiers, who also reverted to physical force to demonstrate their claim on public space, for example by forcing Norwegian passersby from the pavement or knocking down train conductors who asked to see their ticket. In the harbour town of Ålesund, for instance, three drunken navy soldiers beat up a Norwegian man for failing to make way for the three men who were walking side by side on the pavement. Such incidents reveal that conflicts over access to public space were strongly informed by gender. Public space was coded as male territory. The demonstrative presence of the Germans illustrated not only the shift in political power, but also marked male ownership that was contested by the defeated.

German soldier in a bakery in Oslo, April 1940. ©Riksarkivet

Yet everyday relations between the occupier and the occupied were by no means always conflicted. The existence of more harmonious relations with the enemy was perhaps most visibly represented by those Norwegian women who consorted with German men. They were subject to intense scrutiny and public shaming, both during, but especially after the war as they lost the little power the association with the German rulers brought.

Yet women were not the only ones who entered into friendly relations with the occupier. Around 175 000 Norwegians, most of them men, had worked for the Germans during the war. Public opinion swiftly exonerated these men after the liberation, arguing that their relations with the occupier were – unlike those of women – “necessary” to secure the survival of their family. Paying closer attention to the workplace as space of encounter thus brings into view the often amicable relations that developed between Norwegian and German men.

Norwegian workers and German soldiers on a break, Norway 1940. ©Nordlandmuseet

The structure of the workplace invited dialogue, giving rise to temporary alliances that benefited both parts. These pragmatic co-operations often revolved around bartering. Occasionally, they developed into collusions on a larger scale, especially since the plentiful Wehrmacht depots lured with provisions that could be turned into money or exchanged for other goods on the black market. The trial dossiers of such cases reveal the significant level of interdependence between the two sides. Relations of trust developed which broke down the division between the enemies and resulted in a shift in power.

Many German soldiers were billeted in private Norwegians homes for a period of time; others knocked on doors of private dwellings to barter goods or have their washing done. In the realm of the private homes, the asymmetry of power that characterised the relations between the occupier and the occupied shifted in favour of the latter. Norwegians displayed a more assertive manner in these kinds of encounters. This also goes for Norwegian women, who often play a more prominent role in trials connected to the private sphere. It was often women who offered refuge to German deserters, providing them with food and a place to hide. The trial dossiers shine light on the lives of young waitresses who got talking with a deserter while serving and allowed him to stay in their rented room, or peasant women who took pity on a passing German soldier who begged for food. But women also defended their space – and their reputation – against German men, as illustrated in the article by the case of the young woman who was physically assaulted and humiliated in her home by a German acquaintance.

German soldiers and Norwegian women outside a private home, 1940-45. ©Romsdalsmuseet

In general, however, private encounters in the realm of Norwegian homes remained largely friction free. Many auto-biographical writings describe the German soldiers as “nice men” who behaved well. The “decent” behaviour of Wehrmacht soldiers, though partly a myth, was also the result of German occupation policy which guaranteed Norwegians protection of their private property – within certain limits. In everyday life, the Norwegians behaved as if their private space was exempt from the occupation. The German occupiers, keen to win the consent of the occupied, modified their behaviour accordingly.

This demonstrates that relations of power between the occupier and the occupied were not static, but shifting according to temporal and spatial context. As long as the Germans managed to retain their power on the macro level, any minor victory by the occupied remained sporadic and changed the asymmetry only temporarily. The concept of space alone cannot explain the full range of experiences and interactions under German occupation. However, it allows us to think differently about the nature of these interactions, encouraging us to inquire how the seemingly static spatial environment interfere in human interactions.

Dr. Maria Fritsche is Professor in modern international history at the Norwegian University of Science and Technology in Trondheim. Her research focuses on the role and impact of war on societies as well as the societal and political functions of film and cinema. Her current Social History study of the social relations between the German occupiers and the occupied in Europe during the Second World War forms part of the wider research project In a World of Total War: Norway 1939-45.