Civil Defence is an unexpectedly complex topic to write a social history of. At one level, it is relatively straightforward to ask people who were involved in Civil Defence about their lives in the Cold War. Having previously written a history of Civil Defence policy, I wanted to know more about the people involved.[1] Why did they join the organisation? What did they think about Civil Defence’s role in a possible nuclear war? 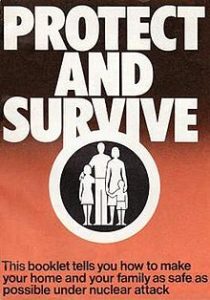 Yet an oral history project highlighted major problems with my initial hope to uncover people’s motivations and experiences of Civil Defence voluntarism. Firstly, recruiting participants proved challenging, although a cohort was identified though advertising in local newspapers in three regions: South Wales, the West Midlands, and the North-East of England.  Second, my participants rarely remembered their motivations, and struggled to recall any sense of Civil Defence being linked to wider questions of nuclear war. It was as if their voluntarism had little or no link to the Cold War itself. Here the complexities of Civil Defence came into play. To understand the memories of these men and women, I had to re-think the way the Cold War had been remembered in popular culture and its impact on individual recollections. I also had to think more carefully about the broader context of people’s lives in order to understand the intersection between Civil Defence, leisure, and socialbility. At the end of this process, I was able to suggest that Civil Defence was important within people’s lives, and people often did have clear views about Civil Defence’s usefulness, but that this was often hidden within their narratives. Understanding Civil Defence voluntarism, and how they made sense of nuclear war, involved four stages.

The first stage was understanding the place of these volunteers in Cold War society. Civil Defence had played a major part on the Second World Home Front in Britain, and the organisation was resurrected in 1948 after the shock of the Berlin Airlift. Volunteers were recruited and trained locally under the aegis of local councils, and, after initial training, met every week for further training, lectures, and practice, with regular exercises taking place on local and regional levels. The organisation continued until 1968, when it was scrapped as a result of government cuts. At its mid-1950s peak over half a million volunteers signed up, revealing the scale of voluntary action which underpinned the British Cold War state. 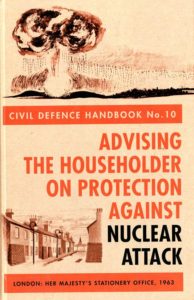 This was far from the case in the 1980s, and charting this was the third stage of analysis. The return of Cold War hostilities saw defence against nuclear weapons become a much more important political and cultural issue than in the pre-1968 era. At the heart of this debate  were the obvious failings of the few measures that existed, specifically the widely criticised Protect and Survive pamphlet and series of animated broadcasts. Civil Defence became central to the attack on the Thatcher Government’s nuclear policies, as it was identified as an attempt to fool people into acquiescing in the flawed logic of deterrence. Quite simply, Civil Defence was totally undermined in print and broadcast media, local politics, and popular culture. Whereas in the 1960s Civil Defence had a contentious but still respectable place within British culture, by the 1980s it was overwhelmingly a source of ridicule or unambiguously perceived as a government lie. Moreover, the cultural narrative of Civil Defence established in the 1980s has largely stayed fixed within the popular memory of the Cold War in the years following the collapse of the Soviet Union. The possibility of survival, and the activism of the Civil Defence volunteers in the 1950s and 1960s, has been largely forgotten.

The appeal of Civil Defence

The final stage of the process was recognising how the complex place of Civil Defence in British culture and politics in the period during and after the participants’ service influenced their memories. It helped explain why the interviewees often, but not always, struggled to remember the details of their service, and why questions concerning the prospect of nuclear war elicited few in-depth responses. The motivations of volunteers were important here. When asked, people stressed a mixture of a sense of altruistic duty mixed with the importance of leisure to explain why they joined. This could range from the importance of helping the local community to wanting to meet people of the opposite sex. It seemed clear that participants used leisure as a motive partly to distance their voluntarism to discredited Civil Defence policies. But leisure and service were intertwined, and it is unsurprising that the memory of voluntary Civil Defence’s social dimension, whether that be training alongside other activities and exercises, or evenings in the pub, have stayed in the mind longer than rather more abstract notions of nuclear war. Perhaps more importantly, it is impossible to separate motives of leisure or duty, as it was the everyday activity of Civil Defence voluntarism that helped to embed a sense of utility in its members.

In the same way, whereas in most cases participants were unable to discuss the role Civil Defence would have played in a nuclear, they were more forthcoming about the importance of the nuclear deterrent in maintaining peace and in expressing anger at the government’s decision to scrap Civil Defence in 1968. The latter was particularly illuminating. In these memories, the suddenness of dissolution is accompanied by the stripping of their quasi-military Civil Defence identity, a symbol of their status as useful citizens, and a sense of being betrayed by the Government. Discussing the end of voluntary Civil Defence allowed the volunteers to narrate their service in such a way that the Cold War battle about the utility of Civil Defence is absent, and in doing so reveal the place Civil Defence held in their lives. Here, Civil Defence is revealed as a valuable contribution to the defence of the nation, and something the government and community should have valued. Clear memories of the concrete ending of the Civil Defence Services contrasted with vague recollections of the more abstract notions of Civil Defence’s nuclear role: the physical realities of the loss of uniform and status being more tangible than the imagined possibilities of the nuclear future. Most importantly these memories allow us to note how volunteers’ Civil Defence identity was valued at the moment it was removed, highlighting how their personal testimony reveals things that might have otherwise been clouded by the participants’ difficulties in constructing narratives in the face of a complex and hostile popular memory. Although they consistently struggled to provide a coherent sense of what the Civil Defence Services would do in an attack, they clearly felt the lack of recognition of their active citizenship within Civil Defence, suggesting that their voluntary service had a personal meaning that punctured the prevailing popular memory.

Speaking with the members of the Civil Defence services revealed the complexity of their voluntarism and the difficulty in establishing the meanings it held for them as individuals. It also showed the influenced of broader patterns of cultural memory, as the negative portrayals of Civil Defence made it difficult for them to speak about their activism in ways which addresses the core purpose of the organisation. Placing their service in a wider context, however, allowed me to understand the importance it did have and to chart the influence of the cultural memory of the Cold War. Hopefully this research will inform others of the history of these volunteers, but also point ways to how we can write new histories of this period while recognising how the political battles of the Cold War continue to shape our understanding of this past.

Dr Matthew Grant is a lecturer in History at the University of Essex, where he specialises in the cultural and political impact of war and conflict on the home front. ‘Making sense of nuclear war: narratives of voluntary civil defence and the memory of Britain’s Cold War‘, the article on which this blog post is based, appears in Social History 44,2 and is available to read online.