My article in the current issue of Social History entitled ‘Boots, material culture and Georgian masculinities’ is the culmination of a project that I have been working on for a few years now. Although I had written about material culture before, in my book Embodying the Militia in Georgian England, this was  the first time that objects had been at the forefront of my approach and had really driven my conclusions.[1]

My primary interest is in the history of masculinity. My work on the militia started out as a study of representation, thinking about the central role of gender in debates about soldiering and the ways that militiamen were perceived by the wider society. Increasingly though, the project shifted to the experiences of the soldiers themselves, exploring the extent to which soldiering informed their ideas of themselves as men and citizens. In this way, I was able to challenge the received view that the image and the reality of the militia were very different, and to explore the close links between masculinity, martiality and citizenship.

One way I tried to get at the soldier’s experience was through the study of their material lives. A chapter on military uniforms and on life in camp explored just how different the private’s material life was, both from his civilian experience and from the world inhabited by his officers.

A theme that came up again and again was footwear. As any reader of military memoirs will know, soldiers complain about shoes and feet all the time: given the amount of marching the militia did, this is unsurprising. I did not have time or space to develop it in the book, so once the book was finished, I started a new project on men’s shoes. Having been a decade at Northampton – the centre of the British shoe industry and the location of the national shoe collection – I thought it was about time that I did.

The first thing that strikes you when you work on material culture is the different rhythm of this type of research. To take one example, if you do research at the National Army Museum’s excellent Templer Study Centre, ‘books’ and ‘objects’ have different online catalogues. If you want a document from 1750, you order it and it arrives in a matter of minutes. If you want an object from 1750, you have to go to Stevenage.

As is often the case, the bulk of the museum’s objects are housed in an off-site store on an industrial estate. Clearly, you cannot just turn up and expect to look at something, in the way that a user of documents is used to doing. Appointments to view objects in museums are made weeks or months in advance, and rely on the generosity of curators who give up their time to supervise you around their collections. The early stages of such a project therefore involve building up relationships with curators, finding out what their museums hold and whether it will be practicable for you to access them.

For this project, I used the national shoe collection at Northampton Museum; the National Army Museum; and the Bata Shoe Museum in Toronto. I have since looked at shoes in other archives, including the National Leather Collection here in Northampton. The curators at all of these institutions were all very generous to me with their time and knowledge, and I would like to take this opportunity to thank them as the project would not have been possible without them. 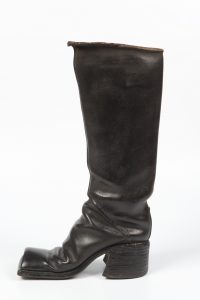 Giving researchers access to collections that are fragile, valuable and not set up for public access is very time intensive. At one point during my visit to Stevenage, one curator was holding a boot and another was holding a torch, while I was trying to take a picture of an inaccessible label within. (This made its way into the article, as the label was of the famous London bootmaker George Hoby.)

The first time I was presented with an eighteenth-century shoe, I was not sure what to do with it. When a document arrives, you read it, but how do you ‘read’ an object? I tentatively measured and photographed it, recorded some information in a notebook, and moved on to the next one. Happily, after viewing several I began to see patterns emerging and my handwritten notes became fuller and more reflective. I started to engage more with the materiality of the object, feeling it for texture, suppleness and weight. Of course, this had to be done with great care as 300 year old leather is very fragile. Gloves have to be worn to protect the leather from moisture and grease, which can make it difficult to get a sense of the material.

Fundamentally, I started to think about the experience of wearing the shoes that their original owner would have had. Nearly all the shoes I handled had signs of wear: some were virtually worn out whereas others were preserved precisely because they were in good condition. As Ulinka Rublack notes, museum curators ‘intervene minimally when doing conservation work’ on shoes, since signs of wear tell us about their owners and the way they were used.[2] More than any other article of clothing, shoes preserve the shape of the wearer’s body. Perhaps for this reason, there are a whole host of superstitions that attach to shoes.

Signs of wear or stretching can tell the historian about the comfort or utility of an item of footwear. Damage or modifications (such as cuts or the addition of spurs) can also tell us about how they were used. The height of heels, the tightness of the fit, the flexibility of the sole and the thickness of the uppers give us an indication of what the footwear would have been like to wear, and the effect that it would have upon the wearer’s body. As a historian of gender, this gives me an insight into the corporeal aspects of masculinity such as posture, bodily movement and physical appearance.

Exploring material culture has therefore been beneficial for me as a historian. Given that my training was in other approaches, it was an uncomfortable and uncertain process at times, but all the more valuable for it. It has encouraged me to think more about gender as an experience and a physical practice, as well as an aspect of representation. More generally, it raises all sorts of questions about the historian’s relationship with the past, and the extent to which they can claim to access or recreate it.

One further outcome for me personally has been the opportunity to work more closely with colleagues in museums, which has led to future collaborations. It has enabled me to engage with several heritage initiatives around Northampton in particular. For example, I am organising an event at the National Leather Collection as part of the Being Human Festival in November. In an academic world dominated by the REF, material culture can help you to be a more impactful historian as well as a more insightful one.

Matthew McCormack is Professor of History at the University of Northampton. He works on the cultural history of Britain’s long eighteenth century. His article ‘Boots, material culture and Georgian masculinities’ is available to read in Social History 42,4.

[1]  Matthew McCormack, Embodying the Militia in Georgian England (Oxford, 2015), chapter 7: ‘The material life of the militiaman’.