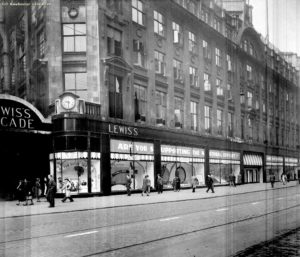 Shopping and shoplifting were fundamental to urban culture in the regional city. The history of shoplifting has largely focussed on middle-class women’s experiences of kleptomania in the grand magasins of large metropoles. However, by shifting the focus to popular department stores in a regional city, we can see that police and emerging forms of social work focussed on the crime to express concerns about working-class women’s increased autonomy and visibility in the interwar urban landscape. For example, in 1923, when Manchester’s branch of the popular Lewis’s department store announced its plans to extend the store to reach 6000 square yards of retail space, the Manchester Guardian celebrated the ‘million pounds scheme.’[1] Its expansion made it the largest store in Manchester and one of the largest in the country. In Urban Redevelopment and Modernity in Interwar Liverpool and Manchester (2016), I showed how the expansion of Lewis’s and its deliberate marketing aimed at working-class consumers facilitated a thriving culture of retailing and was integral to these cities’ programmes of regeneration in the face of economic turbulence and urban decline. Further exploration into the press coverage of Lewis’s expansion revealed that its success in cities like Manchester was mirrored by reportage that noted its location of shop theft.

Existing scholarship on shoplifting has been fundamental to understanding the importance of retail culture for women’s urban experience. Influential work by Erika Rappaport, Tammy Whitlock and Elaine Abelson, exposed the uneasy and often contradictory attitudes towards women’s engagement with modern shopping cultures and its wider relationship to anxieties about gender roles and the modern city.[2] Yet much of this research addresses shoplifting in the grand magasins of large metropoles such as Paris, London and New York and highlights the emergence of the middle-class kleptomaniac, who allegedly stole out of weakness and ‘temptation.’

Certainly, shoplifting took place in significant numbers throughout Britain across the twentieth century. Cases of ‘theft from a shop’, as it was categorised in government criminal statistics from 1934, rose from 15,075 cases nationally in 1935, to 24,490 cases in 1948, and continued to rise, reaching 70,971 in 1968, and 288,672 in 1992. Yet historical evidence relating to shoplifting is not necessarily easy to locate and there are scant archival records for such a widespread crime. Most cases were heard by Courts called the Petty Sessions, which met each day to deal with minor crimes such as small-scale theft, as well as licensing issues and other civil matters. In these records, shoplifting cases are not easily identifiable as such, often just listing ‘larceny’ next to the offender and their punishment. Unfortunately, many of the Petty Sessions archives have not survived at all – perhaps because of fires, bomb damage, or the numerous court and archive relocations that have taken place over the past eighty years. Using the Petty Sessions in conjunction with the few cases heard by Manchester Quarter Sessions and Salford Quarter Sessions courts, who occasionally dealt with more prolific shoplifting offenders, provided some sense of the nature and scale of shoplifting in Manchester in the context of the new retailing culture. Social work archives and especially the records of the Manchester Women’s Christian Temperance Association Police Court Mission Sub-Committee (PCM), which assisted women involved in the Manchester and Salford courts and prison system, provided another perspective on interwar shoplifting. Again, the records are limited but show how the PCM moved away from their original focus on helping women who were alcohol dependent and became increasingly involved with women on shoplifting charges and even intervened when they thought Lewis’s was too tough on its offenders!

Perhaps the lack of archival records was a product of the way in which shoplifting was not necessarily taken seriously by the police or local courts because it was seen as a feminised crime. Certainly, the term shoplifting remained strongly linked with women offenders and in 1947, the Daily Mail claimed that ’99 of 100 shoplifters are women.’[3] Press reports tended to describe men’s property crimes as ‘shop-breaking’ or theft and the rare cases that referred to male shoplifters tended to effeminise the male thief in some way, often through thinly veiled references to homosexuality, mental disorder, or foreignness. 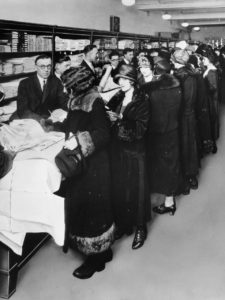 So, although crime and social work records recorded relatively little about shoplifters, press reportage was bountiful. A glance at the national press shows that shoplifting became a way to engage with wider discourse around problematic femininity. For instance, it sensationalised concerns about the 1920’s modern girl, with the Daily Mail warning in 1928, that the disguise of fashion was fundamental to the strategies employed by shoplifters: ‘The successful shoplifters of today are smartly dressed girls who walk into the stores with the assurance of credit customers, deliberately select their spoils, cover each other’s movements – or, as it is known in the slang of the craft, “make a good smother” – and get away with thousands of pounds worth of goods in the shopping seasons.'[4]

Whereas the Daily Express described ‘a fashionably-attired 19-year-old nursemaid’ who ‘carried out deliberate and systematic thefts’ in several shops.[5] Again, the Daily Mail highlighted the case of two domestic servants aged in their early twenties, who appeared at Marlborough Street Magistrates on shoplifting charges ‘wearing fur wraps and Russian boots,’ a very fashionable higher-legged boot associated with the trend for shorter hem lines. Yet ‘it was stated that the women were living with two unemployed Welsh miners and had walked with them from Wales.’[6] When the Second World War broke out, the press used female shoplifters to complain about the ‘goodtime girl’, and one article in the Daily Mail described ‘Annette’ who, it wrote ‘was sleek and slim and her hair was as black as night. Her hose were silk, her heels were high… But her habits ran to shoplifting… Her nails, as they rested on the bar of the dock, glinted redly in the light. Their varnish was matched by the lipstick on her mouth.’[7] These rich and entertaining examples make it clear that for the national press, shoplifting provided fertile ground to make wider complaints about women’s engagement in consumer culture and working-class women’s relative autonomy within city centres. However, they tell us less about shoplifting itself.

Therefore, this research made use of press reporting in the Manchester Guardian, which has not yet been subjected to a crime-reporting analysis, and its editorial archives. Although usually associated with a middle-class readership, the Manchester Guardian attempted to engage a mass audience from the 1920s in the face of competition from the Manchester Evening News and increasingly focussed on Manchester-based issues, alongside its coverage of national and international news. Coverage of shoplifting helped explore how offenders were portrayed in comparison to perspectives from police and social work records. The editorial archives helped think about why shoplifting was covered and to understand its focus on women stealing from shops like Lewis’s. Crime reporting and the use of newspaper databases have attracted considerable historical attention in recent years but the focus on the local press remains limited, which inhibits our understanding of the important regional trends and variations in crime reportage. Although the Manchester Guardian archive is especially rich and accessible, it would be wonderful to see archives for other local newspapers open up for researchers – particularly in light of the current resurgence in the importance of local news cultures and reporting throughout the UK.

Through this range of archival sources, my upcoming Social History 46.3 article moves away from a portrayal of working-class women as vulnerable and heavily policed in cities and instead suggests that interwar shoplifting discourse reflected a sense that poorer women had greater freedoms in the post-1918 city. It suggests that the new democratised shopping culture helped working-class women gain increased visibility in the urban sphere in similar ways to those experienced by more affluent women in the pre-1918 cityscape. 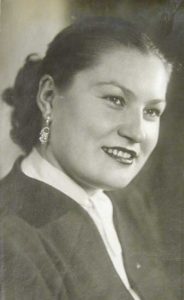 Nina Ponomareva, Soviet discus athlete, was found guilty of shoplifting in 1956 but was discharged and allowed to return to Russia.

Finally, shoplifting matters because it is about inequalities. A 2018 poll for the Guardian found 38% of people from minoritised ethnic communities reported they had been wrongly suspected of shoplifting in the previous five years, in comparison to 14% of white people, with Black people and women more likely to have been wrongly suspected. Certainly, there were notable cause célèbres in the 1950s and 1960s where women accused of shoplifting triggered widespread debates about citizenship and deportation. Most famously perhaps was ‘Nina and the five hats’ – when Soviet Olympic discus champion, Nina Ponomareva, was arrested for shoplifting in 1956 – and West Indian migrant Carmen Bryan, who was threatened with deportation to Jamaica when she admitted shoplifting goods worth less than £2 in 1962. It reminds us that shoplifting might provide entertaining copy for a greedy press on slow news days, but the risks for those accused or convicted can be devastating and long-lasting and deserves serious historical investigation.

Dr Charlotte Wildman is Senior Lecturer in Modern British History at the University of Manchester. A specialist in urban and women’s history, the urban North is often the focus of her research and the topic of her first monograph Urban Redevelopment and Modernity in Interwar Liverpool and Manchester, published by Bloomsbury in 2016. Dr Wildman’s current project looks at working-class homes and family life, addresses the role of illegal and ‘deviant’ behaviours within homes, and explores the implication of state welfare and intervention on criminalising caring arrangements across the twentieth century.