The growing importance of ‘politeness’ in English culture between the 1660s and 1740s coincided with Britain’s emergence as a major imperial power. Alongside a new elite emphasis on refined speech and manners were criticisms of the ‘vulgar’ and the disorders allegedly engendered by traditional festive practices. Non-genteel sounds – or ‘noise’ – were important elements in these criticisms, though they possessed a unique relevance in new colonial environments. I argue in Social History 46.3 that novel colonial soundscapes in the Americas were important sites of early modern sociocultural contestation. 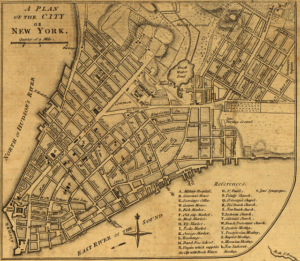 While the sounds of New England villages closely resembled those of provincial English towns, the aural cultures of the staple-producing West Indies, Chesapeake and Lowcountry were strongly shaped by African traditions. English visitors to Barbados and Jamaica were fascinated and frightened by the music and practices of enslaved peoples, for example. In the article, however, I suggest that it was in the mid-Atlantic colonies of New York and Pennsylvania, and especially in the densely-populated cities of New York and Philadelphia, where novel social formations and multi-ethnic festive cultures posed especially acute challenges to sonic order.

Quakers, ‘Uncivil Railing’ and Festive Culture in the Restoration-Era Mid-Atlantic

Dissenters from the Church of England were subjected to severe repression after the restoration of the monarchy in 1660. Quakers, in particular, experienced waves of persecution; historians estimate that between 1650s and 1680s more than ten thousand spent time in gaol, and hundreds died. Immigration to continental Europe or the Americas was an understandable response. Though Quakers spread throughout English America, most settled in the mid-Atlantic region between New England and the Chesapeake colonies of Virginia and Maryland.

In addition to fleeing persecution, Quakers established a more traditional church order. Under the leadership of George Fox, the new Religious Society of Friends organized a system of local, regional and national meetings. Though Fox and other Quakers proudly admitted to ‘uncivil railing’ against the Church of England in the 1650s, by the 1670s the Society of Friends had adopted a method of worship in which silence, rather than loud agitation, was a defining characteristic. It was this more respectable form of Quakerism that William Penn and other Friends attempted to establish in mid-Atlantic proprietary colonies in the 1670s and 1680s.

Some Quakers who emigrated to the New World retained their Commonwealth-era beliefs, however. In Dutch New Amsterdam (which became New York City after England conquered New Netherland in 1664) newly-arrived Quakers ‘began to quake and go into a frenzy, and cry out loudly in the middle of the street, that men should repent, for the day of judgment was at hand’. One stranger entered the centre of town ‘and made terrible hue and cry in the streets and on the bridge, crying woe, woe, to the crowne of pride and the drunkards of Ephraim… Repent – repent, as the kingdom of God is at hand!’. [1] On a tour of the Americas in the early 1670s, George Fox and his companions were verbally accosted by dissident Quakers in Rhode Island, East Jersey and Long Island. Men and women entered staid Friends’ meetings and sang and danced, deploying a form of critique used by Quakers against the Church of England in the 1650s. 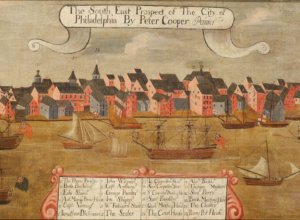 Challenges to aural order came not only from ‘Singing’ and ‘Ranting’ Quakers, who continued to inhabit the region into the eighteenth century. The utterance of seditious words and oaths were particularly dangerous in new and unstable proprietary colonies. ‘Clamours’ among the people of New York signified hostility to the English regime, while in the Quaker-ruled colony of Pennsylvania cursing and the swearing of oaths constituted unique threats to authorities, for whom oaths were anathema. Boisterous tavern cultures quickly developed in the growing ports of New York City and Philadelphia; waterfront bars regularly remained open past the 9 o’clock curfew, and watchmen who attempted to impose order were greeted with physical and verbal abuse.

Slavery also became increasingly important to the English empire after 1660, and there were large numbers of enslaved people in the mid-Atlantic’s two largest towns. In the early eighteenth century, enslaved people constituted approximately ten and twenty percent of the urban populations of Philadelphia and New York, respectively. [2] Poor publicans were regularly indicted for illegally serving liquor to – and trading with – enslaved people. Equally threatening, people of African descent appropriated town commons for noisy Sabbath celebrations. Public gatherings of enslaved people, often joined by European servants and youth, scandalized officials in both cities. Enslaved people’s ‘Rude and Unlawfull Sports and Pastetimes’ disturbed the ‘Peace and Quiett’ of English subjects, and dangerously ‘Drawed asside and mislead’ Christian townspeople. [3]

Over the first half of the eighteenth century, elite colonists increasingly adopted metropolitan standards of politeness and gentility in a process historians have termed cultural anglicization. The settlement following the Revolution of 1688, together with the consolidation and expansion of a British Atlantic economic system, tied American colonists to the empire in new ways. Many colonists enthusiastically imbibed an ideology of liberty and property, and their dependence on English manufactures in an ‘empire of goods’ contributed substantially to the making of colonists’ identities as Britons. 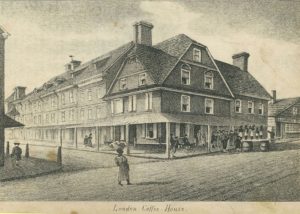 An important commodity imported by colonists was literature. Colonial urban merchants were enthusiastic consumers of ‘polite’ books and periodicals like the Tatler and Spectator in the early eighteenth century. Often heavily gendered, prescriptive works encouraged controlled and soft language, as well as refined tastes in music and other arts. In the 1720s and 1730s, printers in New York and Philadelphia reprinted essays on manners that also encouraged refined ways of speaking and acting. The opening of theatres and aristocratic dance assemblies contributed to urban class segregation in sonic as well as spatial terms.

The lower-sort culture criticized as disorderly by authorities in the late seventeenth century also continued to evolve. In the early 1730s, a young printer named Benjamin Franklin began a campaign to abolish the Philadelphia fair, primarily because of raucous gatherings of slaves and servants (the latter increasingly from Ireland), who had established a customary right to revel at fair time. Disorderly gatherings of labouring people were not limited to biannual fairs. In 1744, the Philadelphia grand jury complained of the many tippling houses in the city, and specifically of the ‘profane Language, horrid Oaths, and Imprecations’ that were so frequently heard in taverns and on city streets. [2]

The best example of the clash between cultures of sound in the early modern mid-Atlantic is provided by a 1736 essay in the New-York Weekly Journal. ‘The Spy’ recounted his visit to a holiday revel outside of New York City, in what was an Afro-European Pinkster (the Dutch Pentecost) celebration originating in New Netherland. Modelled on Ned Ward’s popular Spy periodical of the late 1690s, the narrator provides a salacious look into the New York City underworld from the perspective of a visiting English gentleman.

The account begins with the Spy asking his landlord’s enslaved man why he was unusually merry, which is followed by what might be the first printed attempt to parody the speech of an enslaved person in America. On following the man to the festival, the Spy views enslaved people dancing and singing, accompanied by a banjo, drums and other percussion. Drinking, swearing and cursing occurs alongside a shocking – in the Spy’s view – level of interracial socialization. As in Philadelphia, the ‘confused’ and disorderly sounds heard at the fair were also evident at the daily level. The Spy closed his letter by informing readers that he had on several occasions been driven out of his lodgings in the city ‘by the confused Noise of a Horne, and the singing (or rather howling) of some half drunk Fellows; I am told that the Noise almost resembles the Indians Kintekaying’. [3] The Spy’s use of the term ‘Kintekaying’, a Euro-American term for Indian dancing, suggested the extent to which some New Yorkers allegedly neared a state of Indigenous savagery.

The growth of histories of the senses, including studies of sound, has opened up important new areas of scholarly inquiry in recent years. Yet, as I suggest in more detail in the article, the making of early modern soundscapes was not simply a process of refinement spreading downward from gentry to the middle classes, or outward from metropolitan centres to provinces. Developments in sound were profoundly local and material, reflecting distinct social formations and involving contests over time, space and cultural legitimacy. Sounds have also historically provided immigrant and oppressed peoples with a crucial sense of identity and community – making them a fruitful potential source for social historians.

Daniel Johnson is a social and cultural historian of early America and the early modern Atlantic world. He teaches in the Department of American Culture and Literature at Bilkent University in Ankara. His first book, Making the Early Modern Metropolis: Culture and Power in Philadelphia, 1682-1764, is forthcoming in 2022 (UVA Press). He can be reached at daniel.johnson@bilkent.edu.tr.