Although they are usually seen purely as a terrorist event, the attacks of September 11, 2001, had clear social dimensions.  As we mark the twentieth anniversary of 9/11, my Social History article (46:3) opens a conversation about these little-known dimensions.  I emphasize that the attack targets were workplaces, and most of those killed – close to 3,000 people – were at work.  On the day of the attacks, Manhattan’s World Trade Center was home to 430 companies with more than 35,000 employees.  My article seeks to explore the workers who were killed or survived the attacks, as well as the 90,000 more who toiled at Ground Zero in a lengthy – and dangerous – clean up process that left many scarred, physically and mentally.[1]

On the tenth anniversary of the attacks, the Washington Post first identified these ‘invisible workers.’[2] As the twentieth anniversary approached, I wanted to try and detail their experiences more closely, and to draw some parallels with the Coronavirus crisis, another generation-defining event.

Like millions of other global citizens, I vividly recall where I was when 9/11 happened.  At the time, I was a lecturer in the UK, and I recall being emailed by a colleague in the U.S. in the early afternoon as news of the planes hitting the towers broke.  As I turned on the television, my day stopped.  I shared the disbelief and horror, along with the concerns about terrorism and security, which pervaded that time.  These were, after all, the worst terrorist attacks in American history, and their impact was global, especially in terms of foreign policy.  For years afterwards, as I researched topics in American social and labour history, I never thought about 9/11 as having these dimensions. 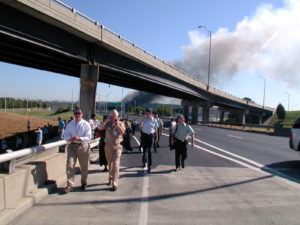 Civilian and Military personnel are evacuated down Interstate highway I-395, following the 9/11 terrorists attack on the Pentagon Building located in Washington, District of Columbia (DC).

This started to change in 2013.  That summer, I went to the U.S. to start research on a history of the AFL-CIO, America’s main union federation.  Staff at the Federation’s headquarters in Washington D.C., located just across from the White House, told me how they joined a panicked exodus of D.C. workers who fled as smoke billowed across from the Pentagon, hit by one of the planes.  Although I was working on other projects, I realized that this was a story with a workplace dimension.  I also remember reading the reports of the federation’s 24th Biennial convention, held in December 2001, and learning that more than 600 union members had been killed in the attacks.  The Twin Towers, I discovered, contained a lot more than the stockbrokers and investment bankers that they were widely associated with.  While I had expected firefighters and other first responders, there were also many others among the slain; hotel and restaurant workers, service workers, public employees, labourers, iron workers, carpenters, and many more.  The unionised victims came from 86 different countries and were a snapshot of America’s diverse twenty-first century workforce. ‘Children lost parents,’ commented AFL-CIO leader Richard Trumka.  ‘We lost co-workers.  In fact, we lost a big part of ourselves.’[3]

As the twentieth anniversary of the attacks approached, I decided to explore the impact of 9/11 on American workers in greater detail.  As I dug deeper, I learned more about the attack’s labour dimensions, yet accounts of these events rarely recognised them.  As one group of medical researchers noted in 2016, ‘The economic impact of the 9/11 terrorist attacks has rarely been studied.’[4]  The focus  – in both popular and emerging scholarly accounts – was much more on foreign policy and terrorism, particularly the controversial war in Iraq that followed.[5]  When workers were mentioned, first responders were valourised as 9/11 ‘heroes,’ yet there was little discussion of how 9/11 had affected workers – or American labour more broadly.[6] 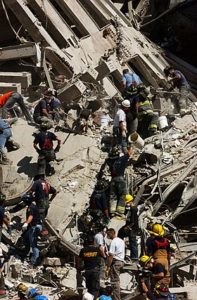 The events of 9/11 had a number of important labour dimensions.  In the short term, workers were integrally involved in responding to the attacks.  When the planes hit, many off-duty firefighters rushed to the scene.  ‘I just wanted to get down there as soon as possible to see what I could do to help’, summarised one.  For countless hours, firefighters fought blazes and pulled out victims.  Many paid with their lives; some 343 members of the International Association of Firefighters were among the dead.[7]  It was a vital response.  In 2002, for example, New York mayor Michael Bloomberg claimed that the actions of the first responders ‘saved 25,000 lives that day.’[8]  Apart from firefighters, iron workers also arrived early, removing tons of twisted metal and saving numerous people.  Labourers, public employees, police officers, and many others assisted them.  Other workers fled their offices, in an exodus that one described as ‘rush hour in reverse.’ Some were saved by chance events, such as being late for work or having stepped out to run an errand.  Their stories highlight the deeply human aspects of how 9/11 was experienced on the ground.[9]

Even some of the best-known images from the day had a social history dimension.  They include the well-known picture of the ‘Dust Lady,’ whose visage captured the horror of the Twin Towers’ collapse and the chaos that ensued.  The ‘Dust Lady’ was actually Marcy Borders, a Bank of America clerical worker in the Towers.  After 9/11, Borders’ story said much about the longer-term impact of that day on Trade Center employees. In 2015, Borders died tragically from stomach cancer at the age of just 42.  Like many survivors, who suffered disproportionately from cancer, respiratory diseases, and PTSD, Borders blamed the toxic chemicals she was exposed to straight after the attacks. ‘I definitely believe it because I don’t have any illnesses’, she explained in late 2014. ‘How do you go from being healthy to waking up the next day with cancer?’  While millions around the world knew Borders’ photo, few were aware of where she had worked – or noticed her premature passing.[10]

As I researched further, I realised that 9/11’s longer-term impact on American labour – like its immediate effects – was largely harmful.  As my article shows, the attacks initiated a recession that hurt working people and led to a climate of patriotic conformity that undermined labour’s demands for progressive legislation.  Ironically, the attacks also facilitated a conservative assault on public sector workers, the same group who were praised as 9/11 ‘heroes’.  This onslaught would become a feature of the post-9/11 landscape, particularly in the wake of the Tea Party elections of 2010.  The battle to secure adequate compensation for those who worked on the 9/11 site was also long and fraught.  President George W. Bush himself called emergency service workers the ‘heroes of 9/11.’ After the attacks, however, a strengthened Bush ignored organized labour’s demands, authorizing a comprehensive assault on labour protections, particularly federal workers tasked with implementing new anti-terrorism regulations.  One union leader succinctly termed Bush’s presidency ‘eight years of torture and hell.’[11] With the twentieth anniversary of the attacks upon us, revisiting 9/11 is particularly appropriate.  There are clear parallels with the 2020-21 Coronavirus pandemic, another catastrophic event.  As well as being global in scope, both crises had a strong New York dimension, and little-known labour aspects.  In both cases, public sector health care workers were on the front line, while the broader impact of the disasters fell disproportionately on the working poor, particularly the service and hospitality workers who were most likely to be laid off.  Other similarities included the presence of mobile morgues on the streets and the absence of planes in the sky.  On the ground, some observers commented on the parallels.  ‘Once again, this city has become Ground Zero,’ declared the BBC’s Nick Bryant in May 2020.[12]

In both crises, moreover, economic and political elites valourised workers to evoke a nationalist response, but this did not translate to better working conditions or the advancement of labour’s political goals.  In 2001 and 2021, hero status was a straitjacket for American workers.

Timothy Minchin is Professor of History at La Trobe University, Melbourne, where his research interests include U.S. labour relations, automotive histories and civil rights. His full article on the invisible workers of 9/11 can be read online in Social History 46.3.

[11] Bush, op. cit.; Terry O’Sullivan quoted in A. MacGillis, ‘For unions, a time of opportunity and worry; Obama to address AFL-CIO as labor faces Its divisions’, Washington Post, 15 September 2009, A15. O’Sullivan was president of the Laborers’ International Union of North America.