One of the typical characteristics of pre-modern military life was the chronic shortage of barracks. This is why troops used to stay in private homes. At the time, the coexistence of soldiers and locals under the same roof was the rule and not the exception. In fact, the accommodation of soldiers was an exaction that all commoners were compelled to satisfy when it was required. It was not an arbitrary measure, but a legitimate prerogative recognised by the monarchs, although it was no less unpopular for that reason. 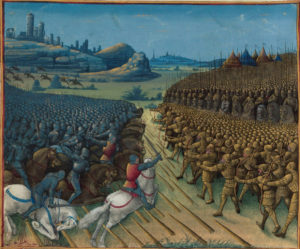 The scale of billeting needed for armies is illustrated by Jean Colombe’s depiction of the Battle of Nicopolis (1396), when troops were said to number almost 400,000.

The lodging of soldiers entailed obvious inconveniences to the locals, but the resulting financial costs were not, in principle, too high. In general, the obligation of the hosts was limited to offering a roof, bed, kitchen utensils, salt, and access to the fireplace for a limited time. The soldiers had to pay for food and other additional expenses. However, as the soldiers depended on their salary to support themselves, each time their payment was delayed, as was often the case, they were forced to live on credit. In the case of this situation being prolonged, it was inevitable that tensions arose between the soldiery, who expected to eat every day; their officers, who had to maintain discipline in this precarious situation; and, the civilian population, who resisted providing supplies without any guarantee of being reimbursed. Faced with this situation, many soldiers deserted or sought alternative means of supporting themselves, whereas others begged or robbed. In certain circumstances, riots also broke out. Therefore, locals tried their best to avoid this exaction or, at least, minimise its effects. In this blog entry I summarise the main conclusions of my article: ‘The problem of billeting distribution in Renaissance Spain: absolutism, privilege and local oligarchies’, published in Social History, vol. 46, issue 3 (August, 2021).

Challenging Interpretations of War and State-Building

Although the royal prerogative of billeting was not a new practice, its social, economic, and political impact increased enormously with the formation of the great standing armies of the Renaissance—a historical phenomenon that most researchers have traditionally associated with the emergence of absolutism. According to this interpretation, tendencies of monarchies towards despotism increased with the increase in the war demands. Since the monarchs did not have sufficient resources to maintain their expensive military apparatuses, they were forced to impose more and more exactions, like the obligation of billeting soldiers. From this perspective, local privileges and institutions are mainly understood as obstacles or even bastions against this extractive policy at the service of war. Thus, the greater or lesser capacity of the monarch to carry out their plans effectively is reduced to a simple relationship of forces, which in most cases favoured the concentration of power in his hands.

Some of the most influential sociological theories about the origin of the modern system of nation-states and their respective constitutional regimes are based on this assumption. In particular, the thesis of Charles Tilly and his followers states that the birth of the ‘nation-state’ was the result of a long process of concentration of capital and coercive power driven by war.[1] However, from a historian’s point of view, it is clear that this interpretation is nothing more than a retrospective projection of current materialist paradigms. The historical evidence accumulated in the last decades has demonstrated the invalidity of this interpretation on multiple fronts. Practically all the concepts that support the classical narratives about the birth of modernity, beginning with those of ‘absolutism’, ‘state’, ‘class’, or ‘nation’, are in question.

Currently, there are many researchers, including sociologists, who recognise that to understand the role of the war in the state-building process, it is necessary to take into consideration additional factors other than the size of the army and bureaucracy or the progress of the military technology and fiscal capacity. However, it is unclear what utility can be derived from adding more nuances to an explanatory model that has already been proven wrong. The problem is not that the correlation between the phenomenon of war and that of the state is more difficult to establish than initially thought, but rather it is the interpretation of the origin of the modern state as the result of a mechanical process of progressive concentration of capital and coercive power which does not correspond to historical reality. This is not because technical and material factors were less important at the time, but because power dynamics were conditioned by moral, legal, and social principles as well as expectations that were completely different from that of the current period.

The issue of military accommodation perfectly illustrates this problem. It not only depended on strategic and logistical factors, but also on the inequalities and legal divisions that characterised pre-modern societies. The same political culture that recognised the legitimacy of the royal prerogative of billeting either allowed certain individuals, communities, and territories to be completely or partially exempt from this exaction or enabled them to decide how to apply it. This meant that even if the monarchs had the power to freely mobilise their troops, their billeting had to be arranged according to established social and legal principles. 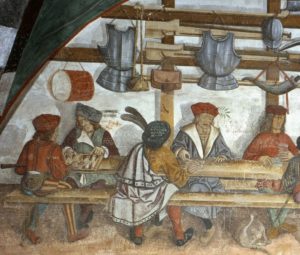 The distribution of the soldiers’ accommodation was highly conditioned by the hierarchies of privilege that founded the social order of that time. The nobility, the clergy, as well as some ministers of the crown were by default exempt from this obligation. The monarch could extend this advantage to other individuals or communities as a reward for services provided or as compensation for an honourable sacrifice. Similarly, poor people who, due to their precarious living conditions, were not in a position to host anyone, were exempt for charitable reasons. Outside of these exceptions, all commoners were potentially subject to this exaction. This meant that the exemption from billeting could, in addition to entailing an obvious practical advantage, be a mark of distinction. The royal prerogative of demanding accommodation for its troops was especially undesirable for wealthy owners, officials, and merchants with social aspirations, not because of the economic costs, but rather because it forced them to publicly reveal their commoner status, from which they tried to distance themselves with their lifestyle.

This legal inequality not only occurred between individuals and families in the same community, but also between neighbouring territories and communities. In some cases, all the inhabitants of a particular place could be partially or completely exempt from the obligation to house soldiers. Additionally, the richest and most influential cities had more power to negotiate restrictions or compensation regarding this issue. Even more important was the autonomy granted to municipal authorities to distribute the burden within their jurisdiction. This allowed wealthy families that did not belong to the nobility but which were part of the local oligarchy that controlled municipal institutions to avoid this exaction. In general, it was enough for them to make it fall on the populations of the suburbs and rural areas that were dependent on the city. It is not by chance that the richest and most privileged communities used to be the least affected by this exaction, nor that those who did not usually endure it were precisely the most reluctant to accept it. 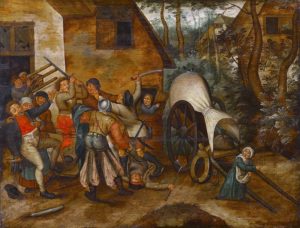 Affray between peasants and soldiers by Pieter Brueghel the Younger

Since the presence of troops was generally unavoidable, the result was a zero-sum game in which exemptions for the winners led to increased costs for the losers. This led to a continuous tension between those individuals, families, and communities who, taking advantage of their position, influence, or circumstances, could minimise or avoid billeting and those who had no other choice but to comply with this obligation. Local exemptions, privileges, and ‘liberties’ could restrict monarchical power, but the real reason for their establishment was the sanction of specific hierarchies of power and privilege. This situation not only had a social and economic impact on the affected communities, but it also had an impact on military logistics. An increase in exempt houses and communities meant a decrease in those available to house soldiers.

The inequality in the distribution of soldiers’ accommodation reinforced the distinction between the privileged and non-privileged in the places where the military presence was more frequent. Since war demands did not diminish, over time, this disparity put great pressure on both host families and communities, as well as on military logistics. This situation in turn forced rulers to try different measures to make the war effort more sustainable, or at least more bearable to the locals. However, any reform was conditioned by the culture of privilege on which the pre-modern political and social order was based. Going beyond that limit could have led to a significant increase in military capacity, but that would have had been at the price of eroding the very constitutional order on which the legitimacy of the monarchical institution itself rested.

Fernando Chavarría-Múgica (fernandochavarria@fcsh.unl.pt) is a researcher at the Portuguese Institute for International Relations (IPRI), Nova University of Lisbon, Portugal. He studies early modern political and legal culture, with a particular interest on border relations, ius gentium, noble factionalism, and the uses of the past in both the Renaissance and more recent times. He holds a Ph.D. from the European University Institute in Florence. He has also been a Marie Curie Intra-European Fellow at the EHESS in Paris (France), Juan de la Cierva Researcher at the University of Alcalá (Spain), and a EURIAS Visiting Fellow at CRASSH, University of Cambridge (United Kingdom).