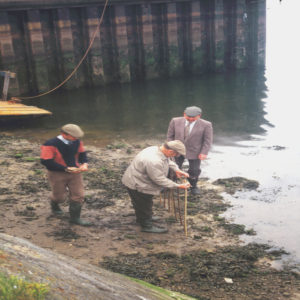 What, you might ask, is the point of writing the longue durée social history of one medieval fish weir? In the case of my article in Social History 46.4, this is a history of the Horngarth (later the Penny Hedge) at Whitby, North Yorkshire. Local histories have been somewhat marginalised by the recognition that we need to write global histories and decolonise and diversify accounts of the past. However, local histories and global histories may be fundamental to one another; and local histories have a key role in addressing the decolonisation and diversification of the past in the service of the present. To exemplify this, we can reflect on how the history of the Horngarth speaks to the present state of Whitby and plans for its future.

Whitby sits on the north eastern coastal plains of Yorkshire at the mouth of the River Esk. It is a small coastal town of about 13 000 people. [1] To visitors it is most famous for a medieval abbey, associations with Captain Cook and Bram Stocker’s Dracula, and award-winning fish and chips. A report, produced during planning for a new potash mine in 2015, provides an economic overview.[2] Between 1991 and 2011 there was ‘a moderately declining population’ with a higher proportion of older and long-term sick or disabled people than the national and regional averages. About 50% were ‘economically active’, a higher than average number were self-employed (12%) or part-time workers (18%), and tourism was a dominant sector of employment: accommodation, food services, retail and repair accounted for 32% of the workforce; accommodation and food services had grown by 40% between 2001 and 2011. Next to tourism came health and social work, manufacturing, and construction (about 10% of the workforce each). Unemployment was above the national average over the period 2009-2013 with annual cycles connected to the seasonality of tourism. 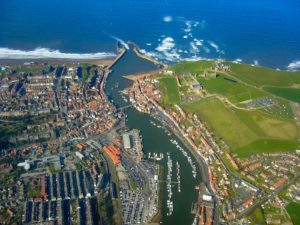 To address this demographic and employment context, Scarborough Borough Council has developed a Whitby Blueprint costed at over £37.8 million.[3] First, it aims to produce a renaissance for the harbour, including expansion of the seafood market. Second, it aims to improve the West Cliff via a green space and revitalisation of Whitby Pavilion. Third, it aims to construct new physical links between the centre of the town and some assets – Pannett Park and the Cinder Track (a disused railway). Fourth, it aims to establish ‘beacon projects’, including a Maritime Training Hub, diversifying the Whitby Fishing School to train and certify people for the maritime, offshore, and renewable energy sectors.

How, then, might the history of the Horngarth speak to Whitby’s current state and these plans for its future? Let’s begin with local-global history and its application to the Horngarth, before returning to the Whitby Blueprint.

Local-global history and the Horngarth

From the well-cited collection of essays edited by A. G. Hopkins [4] to recent special issues of Past & Present [5], there have been cogent arguments for writing histories of the local-global. The local-global observes that local societies lie behind global trends, exploring how local societies generate those global trends and are transformed by them. It recognizes that local societies supplied the labour by which things were discovered and manufactured; that they forged the demand for things as well as the thoughts and behaviours that transformed them from things into objects; and that they created the networks of people, things, and ideas through which the dialogue between local and global occurred.

The social and cultural history of the Horngarth is a neat case-study of the local-global dialogue. The article identifies the Horngarth – a wattle hedge erected annually on the eve of Ascension in Whitby harbour – as the descendant of a medieval fish weir. It considers how interaction between local and global trends might have generated the social cooperation necessary for its construction, trends to which it may in turn have contributed: the formation of peoples and kingdoms in the early middle ages; the conversion of these peoples to Christianity and the establishment of a religious community at Whitby in the seventh century; the networks of the Viking diaspora in the ninth and tenth centuries; or the emergence of the first kingdom of the English in the later tenth and eleventh century. It considers how the Norman Conquest, including the transformation of lordship and the refoundation of the religious community, created the social dynamics within which the weir endured from the twelfth to the sixteenth centuries. It illustrates how the English Reformation, the growth of the alum trade, and the establishment of the English shipping industry transformed its meaning, but how invented traditions preserved its construction to the present day. It notes that the Horngarth perhaps helped the people of Whitby to process the English Reformation through stories situated in a lost past incorporating monasteries, hermits, and practices of penance, and that the traditions they invented contributed to the national renown of the town and its emergence as a tourist destination. In highlighting these points, it serves the decolonising and diversifying agenda by revealing that an economically challenged English provincial seaside town was not always provincial or economically challenged in the past.

The history of the Horngarth and the Whitby Blueprint

The history of the Horngarth speaks to the current circumstances of Whitby and the Whitby Blueprint in a number of ways. 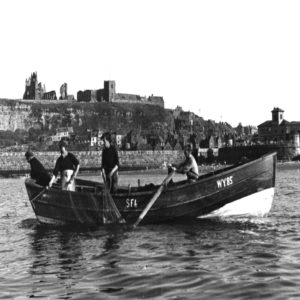 More generally, this history reminds us that the fortunes of Whitby have changed repeatedly as it has responded and contributed to global trends. From the sixth to the sixteenth centuries the people of Whitby and those who acted as lords over them – the kings of the Deirans, the kings of the English and their representatives, and the Abbey – relied on small pockets of arable, a larger landscape of pastoral farming, and the fish resources of the Esk. Nevertheless, the relative importance of different types of economic activity changed. Before the ‘fish event horizon’ of the tenth century, intertidal fishing predominated, particularly focused on the presence of migratory salmon in the Esk; whereas, after this moment, the offshore fishing of herring took over, bringing to Whitby fisherman from up and down the North Sea coast of Britain and from Continental Europe. This activity connected the people of Whitby to the rapidly growing cities of the Low Countries and northern Italy, whose textile industries had a huge demand for wool. Together these economic transformations produced urbanization at Whitby and a local cloth industry. Equally, the discovery nearby of alum in the early seventeenth century – a rare mineral required for dye fixing – generated a shipping industry that made Whitby one of the most important ports in Britain and a key centre for whaling. Promoting the history of the town’s flexible responses and contributions to global trends is one way to foster the belief, energy, and commitment needed for regeneration.

More particularly, this history relates to two sectors of Whitby’s economy, one flourishing, the other floundering. Tourism is the dominant sector. During the eighteenth and nineteenth centuries, the Horngarth and the invented traditions surrounding it came to national attention through the works of Sir Francis Grose and Sir Walter Scott, and the regional press; they remain important to the identity of the town. Yet, the Horngarth’s original significance and the history of its transformation, which make it still more rare and curious, were not recognised. More could be made of it as a tourist attraction.

Fishing, as in many British coastal towns, has suffered, but the Whitby Fishing School confronted this problem, and the proposed Maritime Training Hub will too. Recognising the significance of intertidal salmon fishing and offshore herring fishing to the early history of Whitby is one way of encouraging public support for these initiatives. Acknowledging how that early fishing industry made way for shipbuilding through a reshaping of the harbour in the seventeenth and eighteenth centuries may help people come to terms with proposed changes to support the fish market. The timing and assessment of the weir to meet the vagaries of the tides is a reminder that the town has always been shaped by its dependence on the changing environment of the sea, as it will be as a result of the global process of climate change. The town’s historic cooperation with fishermen from across the North Sea when the offshore herring industry flourished is a useful precedent for the contexts in which graduates of the Maritime Training Hub will work, in turn responding to that global challenge by meeting renewable energy needs.

Dr Thomas Pickles is a senior lecturer at the University of Chester where he specialises in the Early Middle Ages. His research focuses on Anglo-Saxon England, with interests in archaeological sites and ecclesiastical buildings as well as medieval texts.

[4]  A. G. Hopkins (ed.), Global History: Interactions between the Local and the Universal (Basingstoke: Palgrave Macmillan, 2006).