On 20 November 1684, months before Louis XIV revoked the Edict of Nantes, the French king ordered 93 Sephardic converso families to leave the southern part of present-day France. Around half of those families, known as the desterrados de Franca, arrived in Amsterdam, either directly or via detours by boat and on foot. One of the desterrados was Sara Gomez del Valle, who described her situation to the mahamad, the Jewish board of the Sephardic community in Amsterdam, as ‘helpless and without brothers.’[1] Asking for ‘legal powers of matrimony to her orphaned daughter Esther Gomez del Valle,’[2] del Valle’s request was one of many made by those arriving around 1685 in Amsterdam seeking assistance. 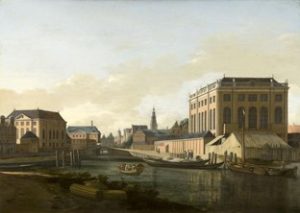 View of the Portuguese and the Great Synagogue from the east. Painting by G. A. Berckheyde. Collection Jewish Historical Museum, M011075

In media, literature, and movies, the city of Amsterdam is depicted as a tolerant shelter and safe haven for persecuted Jews and is praised for its early modern benevolence and fair treatment. But what this treatment entailed and the reason behind the assistance is less known. In Dutch Jewish historiography, historians such as Tirtsah Levie-Bernfeld, Jonathan Israel, and Miriam Bodian, depict the early modern Jewish charity system as a communal endeavor, organized by the board of the Jewish community who asked their members to donate.[3] For example, Tirtsah Levie-Bernfeld wrote in her book Poverty and Welfare that the ‘religious commandment to help and assist persecuted fellow Jews – in Judaism called a mitzvah – created the urge of the Jewish community in Amsterdam ‘to join’ the godly plight.’[4] By examining the charity initiatives for the incoming Jewish refugees from France, this blog post will demonstrate that the early modern civic authorities in Amsterdam also started to support the needs of arriving Jewish refugees.

Logistics and Limits of Refuge and Charity

The charity campaign of 1684-5 started as a religiously-oriented, top-down effort initiated by the Sephardic mahamad. At the outbreak of the crisis in 1684, the mahamad organized transport for refugees who did not have the assets to flee. For example, Isaac Semah Ferro, a well-known broker in Middelburg, was paid 50 guilders for his role as a middleman to compensate boatmen to bring Jewish refugees from Bayonne to Amsterdam.[5] Upon arrival to Amsterdam, refugees were provided housing, food, drinks, and their children were offered free education.

An overview of the Amsterdam Jewish community gifts to French refugees (1685); Stadsarchief Amsterdam.

Due to the arrival of new groups of French Jewish refugees in 1685, the charity system started to reach its limits to support all the refugees and halted their assistance. Being homeless and wandering the streets of Amsterdam, the Jewish refugees became visible in the public domain. This was in violation as per the conditions agreed upon during the settlement of the first Amsterdam Jews around 1600. The agreement stated that the Jewish community was obliged to support their persecuted co-religionists within the local community. The adage of the Jewish community until 1685 was that they – the refugees – would not be a nuisance to the non-Jewish population of Amsterdam. However, in the summer of 1685, the board of the Jewish community received complaints from Amsterdam’s city council about the public visibility of poor Jews. In a letter sent by the Jewish community, the members of the mahamad acknowledged that the French refugees were indeed a ‘burden to other public houses in the city.’[6]

Dealing with a Jewish Migrant Crisis

It can be assumed that the board of the Jewish community found themselves in a difficult position. The most obvious solution was to increase communal taxes. However, this would likely lead to dissatisfaction and disagreements among the members who were already complaining about the existing high taxes. Therefore, the Jewish community decided to deviate from the strategy to shelter and help the poor within their community. In late 1685, the board of the Jewish community requested civic authorities to lower the tax on peats for arriving French refugees. By doing so, the Sephardic community promised that they could afford to feed the poor. The narratives within the petition deviated from their normal rhetoric. The mahamad namely understood that pointing to the religious responsibilities of a mitzvah would not have the same effect on a Protestant authority. Therefore, they emphasized the persecution and the religious violence in France to trigger some sort of non-religious affiliated human sympathy with the persecuted abroad. 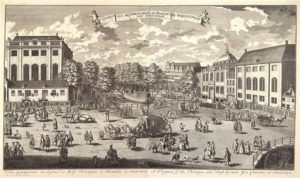 Early modern streetscape. The Portuguese and High German synagogue are visible in the background.

In 1685 the mahamad sent a petition to the municipality of Amsterdam requesting a tax exemption on peat. As peat was used to heat houses, the mahamad warned that refugees in Amsterdam would otherwise ‘perish during the cold and the discomfort of the upcoming winter.’ The Jewish community quoted their previous initiatives to help the poor, but the constant situation ‘abroad’ – in all likelihood referring to France – provoked a constant stream of refugees who found themselves ‘in troubled and despondent times.’[7] Additionally, the mahamad cited ‘the direct emergency’ of the refugees and that the needy families asked for ‘the fatherly protection for all the ‘troubled and ‘poor souls.’[8] Therefore, the mahamad argued that lowering the peat tax was the only solution to bring ‘solace to the poor families.’[9]

In response to this request, the city council of Amsterdam agreed to support incoming French Jewish migrants by exempting the Jewish refugees from paying the peat tax. The resolution -the public announcement of the city council – used the same narratives of compassion to justify their decision. They referred to the inhumane prospects and the troubled and despicable times experienced by the persecuted French refugees.[10] In other words, it appears that the narrative of sympathy and compassion influenced the local authorities in their decision to provide charity.

This blog refutes some assumptions about the early modern Jewish charity system. Although the Jewish community in Amsterdam was expected, and attempted, to shelter and aid their refugees within the community, the influx of the French Jewish migrants demonstrated that this was only feasible when the stream of incoming migrants was steady. This discussion also demonstrates that the recent ‘’humanitarian’’ rhetoric in government and in the public sphere to emphasise the European duty to help and shelter Ukrainian refugees in the twenty-first century is, on many facets, a similar rhetoric to that used by the Jewish community in Amsterdam in 1685.

Hans Wallage is a PhD candidate at the University of Amsterdam where he specialises in Jewish History. His research focuses on the agency of Jewish refugees in forging transnational and trans religious solidarity networks in early modern Europe.