In early modern England, prisoners relied on charity to survive. With next to no state funding, prisons were run for profit from fees and rents charged to those incarcerated, most of whom were either destitute debtors or awaiting criminal trial. As many of these prisoners were too impoverished to subsist in prison, let alone pay these fees, complex economies of aid developed around these institutions, and with these came ethical judgements about what prisoners deserved and how prisons might be used to punish and reform as well as to detain. My article in Social History 47.1 traces both these practices of prison charity and the developing ideologies of incarceration that they reveal, exploring new ideas about what prisons were for and how they might be used to shape and control social relations. 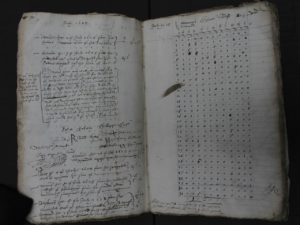 At the heart of my article was an exciting archival find: a charity account book kept by prisoners in London’s Fleet prison between February 1628 and June 1632. Preserved in The National Archives, this unique document survived as a result of accusations of mismanagement of charity funds made to the Commission on Fees, which investigated fee-taking state offices (including prisons) throughout the 1620s and 1630s. Although the inquiry into these accusations was inconclusive, it did preserve this fascinating document, which reveals a lot about not only the different kinds of charity that prisoners received, but also how they managed it and what it was spent on. In certain ways, this was clearly empowering for prisoners, providing them with a vital lifeline that they were able to manage themselves. Yet the account book also hints at the forms of control and oversight that charity was subjected to: it came with caveats of state oversight, donors’ conditions and a set of cultural assumptions and moral judgements about what prisoners did or did not deserve.

The Fleet account provides unusual insight into how different forms of charity interacted. Historians have been able to uncover details of charitable bequests or endowments left in wills as well as formal relief provided by institutions or through poor relief, but it is usually much harder to find comparable evidence of small alms given to beggars or dropped into charity boxes. These more fleeting forms of giving have been estimated to make up a large portion of early modern charity, and yet they are often impossible to quantify, especially in comparison to other sources of aid. By contrast, the Fleet account records the entire range of giving, confirming just how vital small alms were within this wider charitable economy. Indeed, giving to prisoners was fairly event split between substantial personal gifts (both living and willed), institutional aid from courts and officials and small alms. 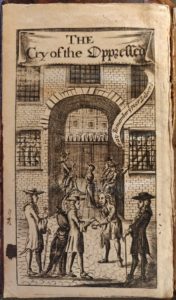 This helps to explain why begging was so important to prisoners. As the frontispiece of Moses Pitt’s Cry of the Oppressed shows, prison begging was a common feature of early modern urban life, especially in London. Prisoners would beg through grated windows with baskets and boxes, while others were licensed to leave the prison to beg in the streets, carrying a charity box that was sealed shut with the prisoners’ collective seal. Often, begging was so loud that it disturbed local residents. Following complaints that neighbours of Newgate prison had suffered ‘great annoyance and damage occasioned to them by the continuall Noises of the Prisoners begging’, City of London authorities attempted to limit the number of beggars there. Nonetheless, the frequency of these kinds of complaint suggest that prisoners were not easily regulated. As prisoners in Ludgate put it, their ‘sad and almost starved condition’ encouraged them to beg in the way most likely to ‘prevaile and work upon the passengers to grant them their charity’. [1] Given that alms contributed over a third of total charity income in the Fleet, it is unsurprising that prisoners reacted badly to attempts to clampdown on begging.

Prisoners were not just involved in soliciting charity, but also had latitude to manage it themselves. Early modern prison populations, especially in London, developed remarkable forms of self-government that were principally geared around the administration of charity money. In the Fleet, this was run by a steward who was a prisoner responsible for keeping the charity accounts and distributing the money.

Charity was spent in three main ways: on the necessities for collective survival in prison, to support the poorest prisoners and on releasing poor prisoners held for small debts. The Fleet account records money paid for food and drink, doctors’ fees, the costs of petitioning for charity, candles and coals and basic repairs. After these collective costs, a large portion of money was divided between ‘sharers’ on the charity, a group of poor prisoners dependent on aid who were formally admitted to the charity much like recipients of parish relief. That said, access to charity was not totally exclusive, as the steward also distributed discretionary funds to other prisoners in times of need. Finally, charity money was also used to allow those imprisoned for small debts to pay off what they owed and secure their release. The account lists 64 prisoners released in this manner during the four and a half years it covered. 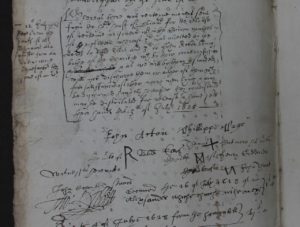 In many ways, then, this became a tool of mutual aid among prisoners. As well as maintaining collective well-being, they could pool money to secure the release of fellow prisoners who just needed a few pounds to get free. In July 1628, two prisoners on the charity (Robert Ellis and John Acton) received personal aid of £3 each from parliament, intended for their discharge. However,  this was not enough to release either man. Instead, they offered the money to the collective charity for the release of other prisoners, an agreement that was formalised, signed and witnessed in the charity accounts. Thanks to this account book, then, we are able to get rare snapshots into these forms of prisoner solidarity.

Yet my research has shown the extent to which these mechanisms of aid and the discourse that surrounded them also functioned as tools of social control imposed upon prisoners. Authorities attempted to regulate prison charity, whether by imposing new rules on begging or inspecting the collection and distribution of charity money. Indeed, the very existence and survival of the Fleet account book speaks to an attempt to oversee the administration of charity. It was not simply a device by which the prisoners kept their own accounts, but also provided a record that could be audited by external authorities such as the Commission on Fees.

Oversight was not just about avoiding corruption. By making sure that prison charity went through these formally-recorded mechanisms, rather than straight into the hands of individual prisoners, authorities maintained control over who received aid and how they spent it. Notably, they were eager to make sure that charity aided those who were deemed the truly destitute victims of misfortune, rather than those who had fallen into debt through excess and vice. Of course, such distinctions were in the eye of the beholder, but this reflected wider cultural belief that prisons and prison charity should be used not just to coerce payment out of debtors, but also to punish the moral failures that had led to their insolvency and, where possible, reform these character defects.

Government oversight and donor discretion were thus fundamental in making sure that prison charity facilitated, rather than undermined, these developing ideologies about the purpose of incarceration. While histories of imprisonment have typically identified the emergence of punitive and rehabilitative ideologies of imprisonment as a feature of modern criminal justice, early modern prison charity reveals a longer genealogy of these ideas.

Dr Richard Thomas Bell is the CMRS Career Development Fellow in Renaissance History at Keble College, Oxford. His research focusses on the history of imprisonment and interactions of social and economic change with political conflict in early modern Britain. He is also co-author of the Early Modern Prisons blog.

[1] London Metropolitan Archives, Court of Aldermen Repertory 79, fos. 216r, 220r–v; Anon, To the Supreame Authority of This Nation, the Parliament of the Common-Wealth of England. The Humble Representation and Addresse of the Prisoners of Lud-Gate (London, 1660) [Wing T1740A], 17–18.