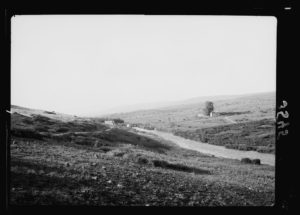 In my recent article in Social History, vol. 47, issue 3 (2022), I argue that the quiet colonial violence of deportation was lived and procedural for socio-economically precarious migrants. There are multiple methods by which historians can ascertain and understand how this violence becomes embedded in the lives and livelihoods of migrants. One such method is a focus on the corporeal effects of colonialism upon migrants at the levels of the intimate and the personal. But how might social and postcolonial historians best explore the bureaucratic and procedural brutality of forced expulsions when, as Adam Goodman asserts, the practice of deportation in the early and mid-twentieth century deliberately left few documentary traces? [1] My own research on mobility and border controls during the Palestine Mandate (1920-1948) centres on documents written either by family members (namely, spouses or children) of deportees or by the deportees themselves with reference to family members. Using these sources, I extrapolate the ways that deportability and illegibility (or conversely, a migrant’s legibility to the state) structure the conditions that allow for the conduct of the intimate, personal, and emotional aspects of life.

In cases involving the deportation of precarious individuals in the early and mid-twentieth century it can be notoriously difficult to gather documentation of the experiences and perspectives of the deportee. In large part, this is because governments carried out administrative deportations without the need for bureaucratic checks and approvals, and because colonial frontier control officers and the police simply deported some persons straight back over the frontier, as was the case in Palestine. Instead, it might be possible to utilise the perspectives of families of the deported. These points of view add insight toward answering the question of how quiet (or otherwise not physically aggressive) colonial violence operated at the levels of the intimate and personal. For instance, petitions, pleading letters, written appeals, and other pieces of documentation as to the deportee’s employment, social position, or medical history written or forwarded by family members, may include emotive language and appeals to personal, bodily experiences of illegibility, undocumented status, and the process of deportation.

Deportability and the protracted vulnerability of migrants

Testimonies written by family members can highlight an awareness of the experiences and the behaviours of persons close to the deportee. In turn, these experiences and behaviours could have affected the process of immigration, deportation, and appeals against removal. This itself offers a new analytical lens into the history of deportation. For instance, it was not uncommon for family members of deportees in Palestine, or their lawyers, to reference the cases and outcomes of other deportees. These angles, better understood through the narratives of persons known intimately to the deportee, offer even deeper appreciation of the emotional and intimate affects of quiet violence and provides ways to given meaning to their expression. Coleborne’s work is instructive here: it suggests that focus on families’ experiences has the potential to lead to wider discussions about emotional cultures within migration history. [2]

The possibility of a migrant’s deportation enforces what De Genova terms the ‘protracted condition’ of vulnerability, as everyday life ‘becomes riddled with precariousness’. [3] My work on both Arabic-speaking and non-Arabic speaking migrants to Palestine from the 1920s through the 1940s affirms that deportable persons—immigrants who entered the territory without documented permission and/or overstayed their permission to reside, or those who could not prove their identity—as well as their spouses and children were constantly confronted with this precariousness. As a result, families had difficulty making a home and in carrying out everyday personal and intimate acts including marriage, beginning a family, or end-of-life care.

The following examples support Drotbohm’s and Hasselberg’s contention that while deportation is used as a legal and policy measure, it also has meaning as a social reality. The process of deportation begins long before and continues long after a given individual’s removal from one country to another takes place. Deportation is not a singular event; therefore, neither are the intimate and personal phenomena that it arrests or perpetuates. [4] This can be exemplified by studying the ways that vulnerability, precariousness, and deportability impacted upon family life.

Forming a family: children and partners narrate deportation and the intimate 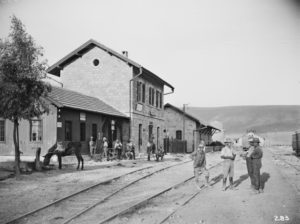 Sometime in early 1945, an elderly couple of seventy-eight and seventy years of age entered British-mandate Palestine from Syria by train, intending to continue across the territory to the city of Haifa on the Mediterranean coast. Reuben and Rahil had neither visas to enter Palestine nor passports. Neither were Palestinian citizens, legal residents, or permitted immigrants. Once their train entered Palestine, immigration officers boarded and discovered the couple did not have permission to enter. They arrested Reuben and Rahil and jailed them both for ten days. As it turned out, the couple were born in Damascus of Jewish parentage, and had at some point received Iranian nationality. They had no income or property in Syria. They had decided to come to Palestine at the request of their adult children in Jaffa, who wished to care for them in their old age. Reuben and Rahil were described by their children as in very poor health with only a few years left to live. They wanted to spend their last years, the children communicated to the mandate government through an attorney, in a ‘natural and humane way’ with their sons and daughters. [5] It took ten months’ worth of appeals made by the couple’s children against the deportation until a court magistrate affirmed they could remain in Palestine.

The bodily effects—physical, psychological, and matters more intimate—of this scenario are hardly difficult to imagine. Deportation threatened the caregiving that elderly parents received from their sons and daughters within the domestic sphere of the family home. This caregiving was something that both the children and parents desired; so too, did its potential denial likely exacerbate the already-poor health condition of Reuben and Rahil over the course of their ten-day jail sentence and ten-month wait for a decision on their case. Their children may also have grappled with the emotions of potentially losing their parents to poor health and infirmity not in the traditional space of the home but after a forced removal to another country and across borders than neither the older nor younger members of the family could easily cross. 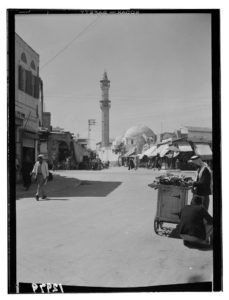 For men and women in young adulthood, marriage, childbirth, and the practices of making a home are similarly intimate aspects of life that increasingly became the domain of state intervention by the early twentieth century as governments legislated on citizenship, nationality, and immigration control. [6] My Social History article mentioned the case of Syrian migrant Bahah and his Palestinian fiancée, Munawar. The police arrested Bahah for illegal presence in Palestine in the mid-1940s and issued a deportation order for his removal. Munawar wrote to the administration to plead for Bahah’s release and asked that he be granted permanent residency in Palestine. Her letters demonstrate not only a sense of urgency but also both affection for her partner and worries about their future intimacy. She described her ‘big hopes’ for her life ‘with this excellent man’ who consoled and sustained her physically and emotionally. She explained that preparations for their marriage had already begun when the government issued a deportation order against Bahah. In order to make her case against the deportation, Munawar recounted her deeply personal family history: she became an orphan by age seven, after her father’s murder and her mother’s subsequent remarriage to ‘a foreigner’. Bahah saved her from ‘an obscure future. . . . misery and danger’ and in return, ‘God blessed him by increasing his business, his revenues, his capital.’ If the government carried out its deportation of Bahah, Munawar wrote, the action would destroy their dream to marry and ‘form a good family’. [7]

Bahah remained in limbo for nearly a year as he awaited the outcome of his appeals against deportation. The words of Munawar describe what Talavera, Núñez-Mchiri, and Heyman call ‘the presence of deportability’ in the everyday lives of ‘undocumented’ individuals. Reflecting on the ways that vulnerability to expulsion shapes social organisation at the personal level, it is evident that Munawar’s postponing of marriage and pregnancy—and potentially also of physical intimacy—is one interpretation of the ‘presence of deportability’. [8] Among other aspects, Munawar’s written appeals to the government reveal a belief that the outcome of her fiancé’s migration and settlement in Palestine was one of an innermost understanding of destiny in that it led to her own engagement and wished-for future family. Munawar did receive replies to her pleading letters: the administration responded each time to affirm the deportation would proceed. She continued to write them undeterred, sometimes daily, through Christmas of 1944 and New Year 1945. It took until July 1945 and an intervention by the Colonial Office in London for Bahah to be granted an immigration certificate and permitted to remain domiciled in Jaffa. For Bahah and for Reuben and Rahil, whose close family narrated parts of their respective deportation experiences, the temporality of deportability manifested in the personal lives of each individual. To fully understand the social consequences of deportability for precarious migrants, attention can be paid to ways their voices might be filtered through the experiences of their loved ones. This reading of history is not meant to dismiss deportees who left few archival traces, but rather to embrace the ways in which the intimate lived experience of deportation can be found in the narration of the subjectivities of their spouses and children.

Lauren Banko is a lecturer in Middle Eastern History in the Economic and Social History subject area at the University of Glasgow. From late 2022 to late 2025, she will be a Wellcome Trust Research Fellow in the Department of History and the Humanitarian and Conflict Response Institute at the University of Manchester. Recently, she was a research associate on the AHRC-funded project, Reckoning with Refugeedom: Refugee Voices in Modern History, at the University of Manchester. Lauren holds a PhD from SOAS, London. She works on borders, mobility control, migration, and displacement in the modern Middle East and in particular, pre-1948 Palestine. Her second monograph project, Subverting the Documentary Regime: Licit and Illicit Mobility along the Borders of Palestine, 1920-1950, is currently in preparation.